Now why did I choose this title, because it’s true, and I’ll cite a couple recent posts 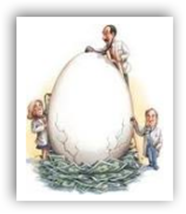 on what is happening in southern California as IPAs are being acquired by health insurance companies.  We had Wellpoint buy out Caremore which is an HMO that was set up to handle managed care for seniors and granted they are a HMO but within the HMO structures, they work with IPAs.

One other recent big IPA acquisition was Memorial IPA in Long Beach which was purchased by United Healthcare and this may be related to financial reasons, but what is not in healthcare companies any more.

When you look at the world of Health IT today as I keep saying, the decision making processes and business models all revolve around those algorithms and I’ll just keep updating items as such as I see them.  I’m not saying this is a bad thing from the technology side but hospitals and healthcare

organizations are facing the squeeze of buying more software algorithms to keep up.  This is costly but with rules and regulations being passed by the federal government who may be a few steps ahead of what can be attained in certain time limits, the insurers are the ones with the big IT infrastructures and they have subsidiaries too that will sell it to healthcare organizations.  Here’s one example where a technology arm of United Healthcare even got a patent for their particular software here.  With record making profits it does not take a brain surgeon to figure out who’s got the money here to create and sell all the technologies.

When it comes to watching how some big corporations grow it’s easy to get lost in the shuffle when trying to figure out some of their business models too and picture in our minds as to how they operate.  United also has this venture in China which works to promote and sell both Chinese medical devices and drugs on a global basis.

I just spoke about 2 southern California examples and this is not the only place in the US where this is happening, but they were big enough stories to gather some press.  In addition the deposits from HAS accounts allow United to keep their bank rolling with over $1 Billion on deposit and this of course competes with other commercial banks for these types of deposits.

So again just being as observer of what’s taking place with mergers and acquisitions today there is a big push to adapt new Health IT processes as it could in fact make the purchase of an IPA much more attractive for an insurer.  Now we do hope that patient care gets in here somewhere too, but that’s a topic we shall leave for another time with those algorithms as we all can read in the news today that money is driving everything and the consumers are left with the short end of the stick as company conveniences and profits seem to always be first. On a related topic you might want to read up on how new contracts are also affecting what doctors will or will not see you and why.  New contracts are negotiated all the time and especially when a merger or acquisition takes place and some of these literally rip the carpet out from under your feet as far as what doctor you can see and what benefits you will have.  It is what it is.  BD

Doctors in U.S. Turning Away Insured Patients–It All Has To Do With Contracts Negotiated, Renewals and Changes In the Payment and Other Related Algorithms

WASHINGTON – As policy makers try to jumpstart health information technology in small physician practices, lessons from independent practice associations—networks of small medical practices—can offer guidance in overcoming barriers to HIT adoption and use, according to a new study by the Center for Studying Health System Change (HSC).

Independent practice associations, or IPAs, which first formed in the 1970s to allow independent medical practices to accept risk-based managed care contracts, can serve as model in how to provide coordinated assistance with HIT activities to otherwise independent and relatively small physician practices, according to the study.

Often because of inadequate technical and financial resources, small practices’ adoption of electronic health records (EHRs) and other HIT lags larger physician practices. And, despite broader trends of physicians moving to larger practice settings, a sizeable share of physicians is likely to practice in small groups for the foreseeable future.