There are some second time offenders on this list too.  I read in another account of the arrests that one procedure they billed for only had 2 doctors who were qualified in the entire state of California to administer, so when it comes to catching coding 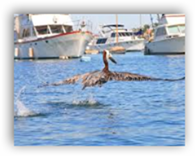 fraud, I would think that one would stand out easy enough, if one were not in fact one of the two.

When you look at the counts, the are big, 883 felony charges for one and 141 for another as an example.  Depending on the outcome, all of these folks could go to jail for life if convicted.  The fraud is a question of a large number of services billed that were never provided.  18 insurance companies as well as the City of Los Angeles were overbilled according the indictment.  BD

The Orange County district attorney's office and the California Department of Insurance released a grand jury transcript and a 181-page indictment listing 884 charges against Dr. Sim Carlisle Hoffman, 59, a radiologist from Newport Beach.

They and Hoffman are accused of billing insurance companies for more expensive and unnecessary procedures that were sometimes never performed.

Heric was previously convicted of felony federal fraud in 2008 and had his medical license suspended for 60 days.