The drug is not going away as it is approved to treat other types of cancers but I question the information on not being effective.  This may or may not be related but companies like United Healthcare are grading oncologists and telling them if they are following the rules.  The link below has more on that topic and you can see the 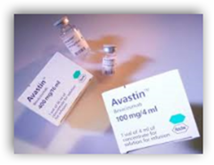 image below to see that breast cancer was included in their study information they provided but again I get a little uneasy on how all of this gets interpreted anymore too.  in one group for colon cancer, patients were prescribed Avastin, a Roche Holding AG biologic that is unproven in that patient group and now that is up for discussion in some areas. They also had stats on how many patients were non compliant with a hormone medication and how they figured that and what numbers were used, I don’t know, probably the patient credit score that FICO is selling as a predictor with very mis matched queries.  <grin>. 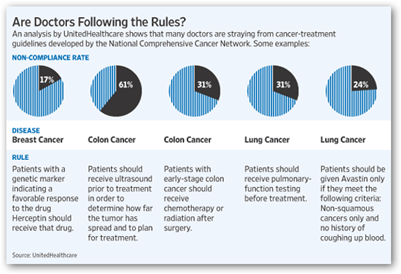 Long and short of it is that without an FDA approval for use with breast cancer, only those who can pay cash will be able to have the drug as an off label treatment now.  I do hope there’s more follow up on the decision and perhaps Roche will give it another round as there are survivors out there from taking Avastin who testified but also we wouldn’t mind a price break either as a full treatment is around $100k.

You what is strange too though is that today Medicare approved the $90k Provenge treatment at $90k for the treatment where that drug is basically used to extend life which is a good thing but only calling attention to the cost here.  BD

A panel of advisors to the Food and Drug Administration voted 6 to 0 to halt the use of the cancer drug Avastin for the treatment of breast cancer, saying studies have failed to show Avastin is effective for that purpose.
The recommendation Wednesday came after two days of testimony from patients, doctors and advocacy groups. The panel heard several tearful accounts, like that of Crystal Hanna, a mother of two who will celebrate her 36th birthday Friday.

The drug will remain on the market for other cancer treatments, but an FDA withdrawal would probably mean insurance companies wouldn't cover it for breast cancer patients. As a result, many women wouldn't be able to afford the treatments, which can cost up to $100,000 a year.
Though the FDA will make the final decision, it rarely ignores recommendations of its advisors. One of the rare instances was in 2008, when the agency approved Avastin for breast cancer treatment. The decision came under the agency's accelerated approval process, which fast-tracks potentially life-saving drugs on a conditional basis.

"We are very disappointed by the committee's recommendation," said Krysta Pellegrino, a spokeswoman for Genentech, which is based in South San Francisco. The company has successfully marketed Avastin as a blockbuster drug for treating colon, lung and brain cancers.