I guess the big question is getting to be, has Nuance missed anybody yet?  I think since I have been covering them at the blog they seem to have quite a group of acquisitions, most of the speech recognition companies.  I had not heard of SVOX and am guessing they are a big player in Europe.  The website shows all types of speech technologies from text to automotive.  Nuance has also been rumored of late to be working with Apple on some new integrated features.  One of their partners listed is “Microsoft Auto”. 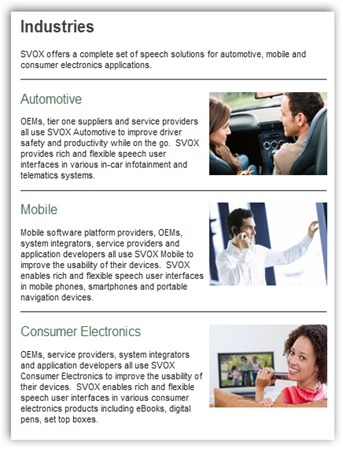 Also they do business with Google being the technology partner for Google Translate and dictionary services with speech recognition.  Their mobile technology lists quite a few automobile companies as well such as Audi Nissan, Porsche so it sounds like they have done a ton of development so we can have our talking cars, which is a good thing as that’s less time we have to distract ourselves from driving.  The dollar amount of the purchase was not stated but I agree with Xconomy here in just viewing the website, it’s a big one as there’s a lot going on here.  BD

Zurich-based embedded speech software firm SVOX, Xconomy has learned from a source with knowledge of the deal. The acquisition price wasn’t disclosed, but is said to be in the triple-digit millions of dollars.

The deal seems to make sense for Nuance, which is trying to dominate the fields of speech, imaging, and communications technologies—especially speech.