Home » My Commentaries » Other Items of Interest » Technology » Windows Mobile » Cellphone Died This Week–My New Phone is Windows Mobile 7 - I Wanted Security, Privacy and Applications - In That Order

Cellphone Died This Week–My New Phone is Windows Mobile 7 - I Wanted Security, Privacy and Applications - In That Order

I was hoping to wait a little longer as my 2 year contract had been up for a while now and I wanted a phone with the qwerty keyboard, but that was not going to

happen.  If you follow me on Twitter then you saw my comments about being a little backwards with an on-screen keyboard but I’ll adjust and that would have happened no mater if I would have chosen another brand and operating system too and I’ll cut the nails down a bit:)  When a phone dies and won’t hard reset and freezes there’s not much choice.  As mentioned in the title I want the best security and choices for privacy too and thus my choice for the Windows Mobile Phone.

So far I have been happy with my selection as it was made quickly as I was actually thinking about the Iphone as my next one but with the news of late with privacy (and I do want that) the Windows Phone seemed to be a better match.  I have been a long time Windows Mobile user from the days before they were phones and one of the founding members of the Los Angeles Mobile User’s group, 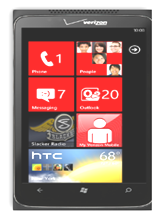 which I think we are about close to 12 years old now, the oldest and longest running group at Microsoft and I know that because the group received an award along with those employees at Microsoft who take time to keep it going.  This last year has been a little tough but I think things are going to pick up again.

With the new phone, having been a long time user didn’t really have any effect this time as the entire format is new and I had to learn how to use it like anyone else out there, and so far so good.  The phone is very responsive and I like the arrangements of the tiles and plus it has MS Office on the unit and I have used Mobile Office since it came out, a long time ago, so one good thing that remains steady.  I am with Verizon and they only had the Trophy with the on screen keyboard so I am grumbling a little bit but again I would have had that with many of the other phone choices too.

I do have to say one thing though as when I called the local Verizon store to find out if they were immediately available and I briefly told them about my background with the User’s group and being a healthcare blogger, they kind of rolled out some red carpet and just happened to have a Windows Mobile representative in the store doing some phone demonstrations and helping out and she even laughed a bit about my finger/nail dilemma and being about 24 hours I’m retraining myself and it’s going better:)

Having the X-Box on the phone is kind of an added treat because I have never done much with X-Box and so having it there is nice and I did pay for Pac-Man as an application as I have had it on my phone for years so couldn’t live without that one.  One thing though with the applications, I think Windows Mobile 7 is giving the Iphone a good race on who has the most “fart” applications:)  Ok needed some humor here but that is real as far as the number of those types of applications and I have heard others on the web jest about these applications too but until I got full into looking at all of what is available in the new format I didn’t realize how many were there:)

Again as mentioned this is a whole new format so programs for prior versions here do not work on Windows 7 so adios to my old Pocket PC software library.  There are a few things on my wish list and when the Mango update comes out I hope they will be there, such as Skype and QIK, and being Microsoft bought both of those companies recently I might be in luck here. I used QIK to live stream with the phone for videos and so forth and I do miss Skype on the phone.  In addition the update will include ring tones and that is not an important one per se, but my phone has quacked for years and this is the first time in a long time I won’t be able to have the

I downloaded the Bank of America application as that is of course one I will be using and nice to have mobility there.

Epocrates is one that is missing and on the web site they stated they would no longer be supporting Windows Mobile but maybe that will change too. I don’t miss Active Synch and that’s kind of an inside joke to a degree as we all have had some frustrations over the years with it and how it has issues and the Zune synch seems to be pretty solid.  One other small item I miss is the access to a file explorer so I can see the contents of the drive but again perhaps that will be upcoming, it’s not necessary but being I had access in the past to move files around, etc. I kind of miss it, so I guess that actually means I do miss active synch a little bit:)

I do use other technologies but being I spent some time writing code with Microsoft technologies I tend to use more of their software and products as most of the time they have been the first and most solid solutions. I’m writing on this on an IMAC and I used a lot of Google applications too, like this blog so I try to use a bit of all technologies if they fit and offer me security I want as well as functionality.  As a matter of fact there are quite a few Google software programs that can be downloaded and used for free on the phone and I have a few on there. 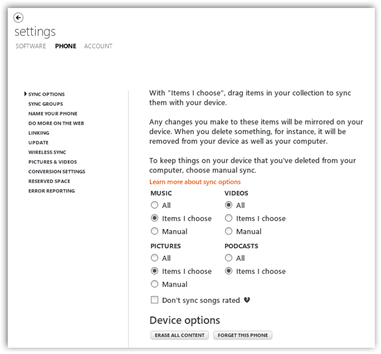 One item that is really handy is the “People” cube which is connected to Linked in and being I aggregate my Tweets over there it’s just a swipe of the finger to check in and it also is connected to my address book.  You can have Facebook on there too if you want but I put my account in the non-active status a while back as it was just too much with disruptions and distractions for me as I don’t use coupons and frankly am already pretty much set with everything I need without it.  I could some day re-activate the account but again it was proving to be more of a disruption for what I do and Twitter is my main social network as it offers efficiency above everything else which is what I want, not more stuff and email locations to take up my time.

I looked through at the health and fitness

programs and most are like what you see for the other phones and a ton of BMI calculators and so forth and I am guessing soon though with all the HealthVault mobile applications we might start seeing a listing there to make it easy for consumers to find software to find in one spot in case they miss the HealthVault page.   By the way the mobile version of HealthVault works good on the phone and the format is simple and easy.

Overall it’s a very well functioning phone and fast and I was upgrading from a Windows Samsung unit.  I like the size of the drive, no more having to have a storage card.  One other interesting addition from the Verizon side is the Global Sim activation card which is used if you are going over seas and this is a first for a 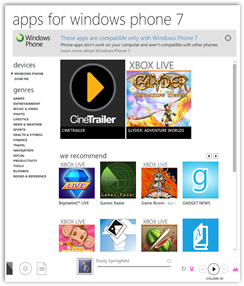 CDMA phone to have this capability that I have seen, or least included in the initial package.

Coming back around to my initial comments, security and privacy matter to me and thus again my choice here as when you stop and think with “Exchange” and connecting email servers and so forth for a number of years I think the odds should be very good here with Microsoft as you head would spin sometimes if you were to see all the security servers and products they offer.  When producing complex mobile unit there’s a lot that goes into it, a ton more than the little simple CE embedded stuff I wrote up years ago for the devices when all they could do was VB and those programs were pretty ugly screen wise and slow by today’s standards.  Also I should mention the use of the Sky Drive was useful too for some storage here.

Once upon a time a while back someone from Microsoft kind of told me that the mobile developers were a frustrated bunch as they had so much written that could modularly fit in to so many areas and when some of their work would finally go public they would about fall into shock after the long haul coding, coding and more coding, and I think it might be safe to kind of say this all around as with all the developers working internally and externally with applications to coordinate, they get their choices of what to use and what not to use, or maybe some gets put on the next level up to be released at a later date.  There’s also an Amazon reader app on the unit for books at present and using the speech recognition with Bing and the hardware button makes it pretty easy to browse the web.

I’ll be looking forward to the Mango update when it comes out which is going to be free for current phone owners too, as who doesn’t like more functionality, I do and look forward to it.  Again, security was top on my list here and secondary privacy too so I think I have a good combination here, other than whining about a qwerty keyboard, which I will soon overcome, I think:) 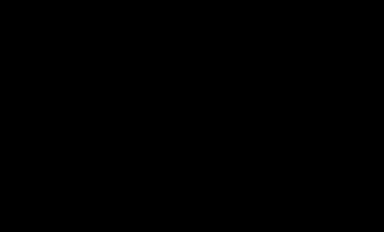 Below is another link with some interesting other ideas for using Microsoft Tags with Razcode for authentication purposes too.  BD