I learn something new every day and had no idea until recently that the site existed.  Their preferred form of payment according to the article written here is Bitcoin, 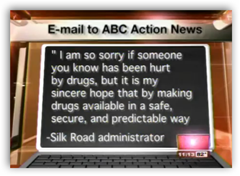 which is a peer to peer payment system for lack of a better way to describe how it functions.  Bitcoin has been around for a while and has come under fire from the government for their services they offer as this is a virtual account of money that can be translated to dollars and other currency; however there’s no control over the transactions so I am guessing the one loss today reported is just flat out gone.

If Bitcoin grows at an accelerated pace it stands to decentralize currency and is not able to be tracked so in other words it sounds like a “digital” cash business.  I have never used such a service and am just providing awareness information here. Getting back over to “Silk Road”, it has opened up a digital black market for getting drugs on line.  For both programs to work you do need to download software for both programs as it hides your identity basically.  You can watch the video below for additional details.  When you read the comments, it’s somewhat of an insane explanation as to why Silk Road exists by providing a safe environment for those to buy their illicit drugs?  I wonder how long it will exist and according to the ABC report there’s no official word from the DEA about investigating the site.

I don’t know what or how our Congress could do with an area like this though as far as creating an effective law as it seems this is over the heads of comprehension of most.  Sure they know it exists, but how do you put a stop to the trafficking of illegal and other drugs through this network?  Time for the members of Congress to hire some “real” Algo Men and become digital literate as to what’s happening in the real world of technology.  I have said this many times that our lawmakers need to venture out of the 70s and address real situations and stop focusing on abortions and other such matters.  I think it’s also time to really start thinking about “digital” law formats soon too.  If you are a parent, this is something you might want to be aware of as well as students and children could be using the network to buy drugs.  As you can see below embedding videos is still up for a live discussion with nothing resolved as of yet.

I don’t know if the site sells other drugs or not that are perhaps counterfeits of real drugs or not but again, this goes to substantiate what I have said about a bar code system for recalls and authenticating real pharmaceuticals.  Shoot we can’t even get technology out there for “legal drugs” that will help us with authenticity and give

consumers the information they need.

Again with the first loss reported via Bitcoin, as it does with any transaction process will cause people wake up and take a 2nd look when funds are flat out gone, so it remains to be seen on how the transaction portions of peer to peer business will result as a digital decentralized currency system idea probably is not going to disappear any time soon and who knows what will appear next with new algorithms that can be created.  In a post yesterday, the hackers of the Internet are also making their statement on security and regulations too.

So I guess a future of soap operas and abortion talk is all we are going to be in store for while technology continues to haunt the “non participants” who make our laws.  Sadly it appears that most only saw technology like IBM Watson as a game since it was used on Jeopardy and that’s the sad reality of digital illiteracy with lawmakers today as it seems the hacking and algorithmic formulas just circle around the oblivious and we all suffer.

TAMPA - You can get anything on the internet nowadays -- cars, homes, and now, black tar heroin.

It’s a website boasting thousands of members that was created in February, according to its administrators. On the main page, they proudly and openly sell LSD, marijuana, ecstasy, and most any other drug you can name.

“He is basically the eBay or the Amazon of the drug-trafficking world,” said Capt. Robert Alfonso, head of the narcotics division of the Pinellas County Sheriff’s Office.

Investigator Michael George asked the Silk Road administrator about the addicts that could potentially die because of products sold on the website.

He responded, “I am so sorry if someone you know has been hurt by drugs, but it is my sincere hope that by making drugs available in a safe, secure, and predictable way, that we will eliminate the violence and danger of obtaining and using drugs through traditional methods. We also hope that, by increasing competition for providing drugs in our marketplace, the quality will rise and price will drop, so that addicts can afford the drugs they need and still have money left over to live a normal life, without as much danger of overdose."

“I see that as insanity. It makes absolutely no sense at all. This is what this person will say to justify his behavior, and it’s completely irresponsible,” VanBomel responded.