Home » Medically Related » H1N1 Update – Long Lines At Drive Through Vaccine Facilities in Austin and Dr. Gupta Gets It in Afghanistan

H1N1 Update – Long Lines At Drive Through Vaccine Facilities in Austin and Dr. Gupta Gets It in Afghanistan

This is amazing over a mile long line for the shots, and reason was due to the ER room at the hospital, with most of the patients they are seeing

suffering from the flu and do end up having H1N1.  Boy this is really contagious, more so than thought at times.  Next month they plan another event just the same, using a barn where the cars can drive through.  BD

In a related story, even Dr. Gupta got a case of it too.  A section of his comments below:

“I am not someone who gets sick, really ever. And this was the sickest I have ever been. I would’ve much preferred my own bed with all the comforts of home – including a wife who would’ve taken great pity on me and allowed me lots of rest and relaxation. Still, I am here to blog about it, after taking the requisite few days to stay at home and not spread my gift from Afghanistan to all my colleagues at work. In case you are curious, there wasn’t much the doctors could really do for me. Some Tylenol and a sinus decongestant (the same my wife would’ve given me). We also got IV fluids, given our inability to keep anything down. Within a couple days, I felt a 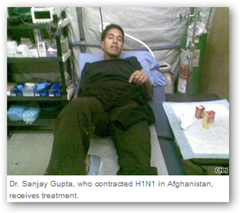 lot better, and a few days after that – I was back to normal. It was a lot like… the flu – with a different name. A lot of people will get the exact symptoms I described above, and for most people, it will simply mean a few miserable days, hopefully spent in your home – and not in a war zone.

(CBS) At the Travis County Fairgrounds in Austin, health officials turned a huge livestock barn into a drive-through clinic for free seasonal flu shots.
They expected a strong turnout, but county medical director Dr. Philip Huang says it was overwhelming.
"This is a record for us," Huang said.
The line of cars stretched more than a mile.
"I am very concerned," said Savana Wilmot. "I'm very over-protective of my kid."
Officials began the day with 1,500 doses of vaccine, but by mid-morning were already running out. They scrambled to find 1,200 more doses and extra medics, reports CBS News correspondent Don Teague.

At Dell Children's Medical Center, emergency room doctors say most of the 200 people they see each day suffering from flu symptoms do have H1N1.