Home » Insurance » Medically Related » Other Items of Interest » Healthcare – Who’s Picketing This Week, Where and Who

Healthcare – Who’s Picketing This Week, Where and Who

With all the unrest and discussions on healthcare reform, I decided to take a quick look around the web.  We have everything from the G-20 meeting in Pittsburgh to healthcare workers at Kaiser demonstrating over healthcare and employment issues.  Some of the picketing is very peaceful and some appears not to be, so I am guessing protests and picketing is going to continue until our Congress finally gets a solution in place.  Healthcare reform with the current economics is not making for a good mix anywhere in the US.

Some of this comes down to emerging technologies replacing humans as has been going on for a few years, but the pace and party due to the 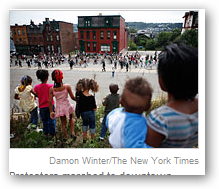 economy has accelerated.  New technologies are also rapidly changing the way we are both cared for and the ways healthcare is delivered, almost at a pace that is too fast for all to absorb, learn, and accept and is the main reason this has to be addressed quickly as the longer we go without policies and digital algorithmic centric laws in place, the worse it will get, as the fear of the unknown drives it’s own frustrations and emotions among us as well.  BD

The police here arrested 110 people on Friday night, according to the mayor’s office. They dispersed hundreds of students milling near the University of Pittsburgh with pepper spray and smoke canisters in a scene reminiscent of the previous night’s disturbances on the first day of the economic summit.

SAN FRANCISCO — In case the giant hotel corporations now bargaining with their workers for a new citywide contract had any doubts, over 1,700 of those workers made clear Sept. 24 they and their union, Unite Here Local 2, are determined to win a fair contract that maintains strong health care coverage and keeps their jobs secure. Their current contract expired in August.

Supporters of a public health plan Tuesday stepped up their campaign to make sure the concept isn't dropped by Congress, holding rallies in Sacramento and across the country against what they contend is a private insurance industry run amok.

Anthem Blue Cross, the state's largest health insurer with 6.8 million subscribers, served as a target for demonstrators in Sacramento and five other protests in the state's largest cities. Dozens of pickets marched outside the company's offices near the state Capitol to deliver a message: "Big Insurance: Sick of it."

Union spokesman Butch Santicola estimated that 180 of the district's 186 faculty members were carrying signs on the first day of the strike. The few teachers not present, he said, were ill.

South Butler County is the only school district in Pennsylvania where teachers are on strike, according to the state Department of Education.

CHICAGO –– “This picket line is really speaking for all the people of Illinois who need decent health care,” Illinois Gov. Pat Quinn told striking workers at SK Hand Tools Corporation. “Health care is not a privilege. It’s a fundamental right as a human being.”
Quinn joined the picket line at this southwest side company whose 70 workers have been on strike since August 24 when they discovered the company had terminated their health care coverage without notice. Teamsters Local 743 represents the workers.

Ocean State Action, an umbrella group of public sector unions, advocates for low income Rhode Islanders, and social justice groups, staged a protest against United Healthcare late Tuesday afternoon.
The group claims United denies claims and care in order to boost its profit for its shareholders and that it is working against health care reform.

Isoff said her health coverage comes with high premiums and deductibles, and the insurance isn't accepted by some doctors. 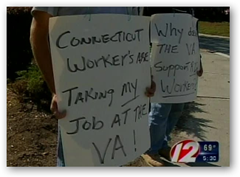 As union workers at the 120-bed nursing home renegotiate their contract, they're asking for more generous health insurance and a bigger raise than the 1 percent increase their employer is offering. The Azalea Court workers who picketed said they make $9 to $15 an hour, and one worker said she pays $240 a month for coverage for herself and two children.

At the center of the controversy was an informational picket from union members. The picketers weren't trying to stop veterans from getting medical care. They say they're outside the hospital to give information to the public; information that the VA hospital says is all wrong.

When a RIPTA bus driver saw the picket in front of the Veterans Medical Center, he did not want to cross the line. Instead, he dropped his veterans passengers off across the street from their stop; forcing vets in wheelchairs, and one who was blind, to walk nearly 200 feet to the hospital.

SACRAMENTO and ANAHEIM, Calif., Sept. 28 /PRNewswire-USNewswire/ -- Kaiser Permanente employees will be picketing in force outside five Kaiser facilities this week to protest company plans to slash 1,350 jobs in coming months. More than 5,000 union members have attended the 14 prior pickets in SEIU-UHW's statewide campaign.

In mid-August, Kaiser announced that net income for the second quarter was $620 million. Just days later, Kaiser announced its intention to eliminate 1,350 SEIU-UHW positions statewide. We oppose this action. See full coverage of our pickets at www.seiu-uhw.org/kaiser.