Operating an HMO without a license is added here, but the doctor has no medical license, so that appears to be strike number one.  He reportedly made claims he had natural solutions that would be better than chemo, and that’s a dangerous place to be.  We all read about natural solutions and 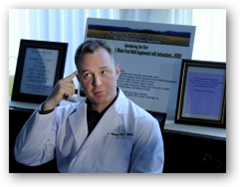 perhaps even add supplements on our own, but different when they are prescribed from someone without a license and perhaps running an HMO too at the same time?  He charged a monthly fee for access to his supplements that were supposed to cure AIDS and Cancer.  I wonder if he did any billing on this too, just curious.

This is no relation to me as I am an admitted quack, being I am not a clinician and work on the tech side of healthcare.  last year we had this oncologist with this belief about cancer being a fungus:

This Oncologist believes Cancer is a Fungus?

That link by the way is very well commented by certified oncologists that will give you the straight up, so well worth reading.  BD

Daryn Peterson, a self-proclaimed "natural doctor," was arrested Thursday on allegations that he told an undercover investigator posing as a patient that he could cure his cancer.

Peterson, 37, was featured in an article in The Register in June, where he claimed that his vitamins could cure AIDS and cancer. He also described his all-natural health insurance plan that charged a monthly fee for access to his supplements.

Peterson is not a licensed medical doctor. In the June article, a UCI oncologist said Peterson's claims made no sense and that chemo, radiation or surgery are what put cancer in remission.