Gizmodo has a preview of the new Tablet PC in the works from Microsoft, just when we were about to give up.  As the article states, this is actually a booklet with multi touch, but it looks like a very unique Tablet PC to me.  You can visit the website and see the video that shows the Tablet/Booklet in motion.  The hinge is very cool.  We were promised more to follow soon.  I am curious if you can fold it over and use one side at a time as well.  We all thought maybe Apple was going to have the next tablet, but we have a surprise here. 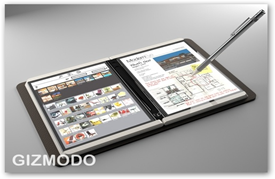 I am an avid Tablet PC fan and have learned how to work with both the touch and inking portions and I would never go back to a notebook, having to walk around with an “open pizza box” lid that I have to figure out what to do with.  Slates have always been my favorite.  Watch the video and think about working on an EMR in this fashion.  BD 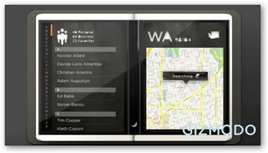 Courier is a real device, and we've heard that it's in the "late prototype" stage of development. It's not a tablet, it's a booklet. The dual 7-inch (or so) screens are multitouch, and designed for writing, flicking and drawing with a stylus, in addition to fingers. They're connected by a hinge that holds a single iPhone-esque home button. Statuses, like wireless signal and battery life, are displayed along the rim of one of the screens. On the back cover is a camera, and it might charge through an inductive pad, like the Palm Touchstone charging dock for Pre. 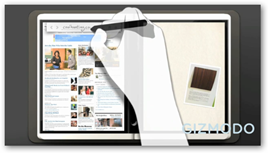 This video is branded Pioneer Studios, a Microsoft division within E&D that specializes in this kind of work, working with another agency that's a long-time Microsoft collaborator on confidential projects. 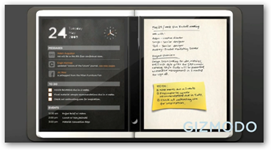