Only in the OC….this is a very unusual story and embarrassing to say the least.  Did he somehow read something that was misleading here on how to 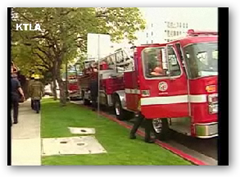 increase his size?  This is one for the dumb and dumber files literally with dumbbells!  The article said he waited 3 days before getting help.  The procedure to remove the weight took 2 hours and the hospital kept the patient under psychiatric hold after the patient muttered “this will make me the chief of my tribe”.  I guess we now have tribes in the OC too.  The fire fighters had to dress in full surgical garments when removing the weight.

The news video is pretty interesting at the source too, one woman stated “do not put your wiener in a dumbbell”  The fire department was called to the ER room to saw off the dumbbell.  This man will be remembered for sure at Hoag and the fire department for quite a while.  BD

Firefighters had to be called to an emergency room in Newport Beach  to help save a man's penis when it got stuck in the hole of a steel dumbbell, Costa Mesa newspaper The Daily Pilot reported.

Costa Mesa police said the man was attempting to enlarge the size of his penis. Authorities said the man's organ had swollen to five times its normal size.