Wyeth discontinued the old version in 2005.  2 new ingredients were added to the new version to avoid chemical reactions.  Wyeth though seems to have a strong scientific argument in the case and in a short amount of time, Wyeth will be Pfizer.  This is somewhat rare to see a pharmaceutical company sue the FDA, so again it makes you believe there’s some real strong reason for this as the FDA is what gives drug companies their approval on the other side of the coin.  BD

RENTON, N.J. — Drugmaker Wyeth on Wednesday sued the Food and Drug Administration to block the sale of a generic rival to its 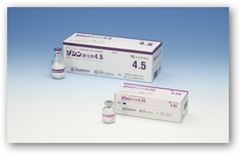 intravenous antibiotic Zosyn, claiming the generic is not an equivalent product and could harm critically ill patients.

The lawsuit seeks to prevent Orchid Chemicals & Pharmaceuticals Ltd. o f Chennai, India, from selling a generic version of Zosyn that the FDA approved last week. The suit also asks the court to order the FDA to withdraw its approval of Orchid's products or any generic versions that aren't exactly the same as Zosyn.

The lawsuit calls the FDA's approval of Orchid's products "arbitrary, capricious, an abuse of discretion" and "unlawful." The approval "permits the marketing of a generic drug product that cannot be safely used in the same manner as the branded product" and "seriously endangers patient health," the lawsuit states.

Wyeth discontinued the old version in October 2005, when the FDA approved a newer version that adds two ingredients to prevent the harmful chemical reaction.

The lawsuit names as defendants the FDA, the U.S. Department of Health and Human Services and its head, Secretary Kathleen Sebelius, and Dr. Margaret Hamburg, commissioner of the FDA.