Home » Medically Related » Other Items of Interest » The Federal Reserve – What’s the Answer – Roll Back Regulation and Start Running Those Algorithms?

We all had the bail out take place and the banks appear to be running everything.  With money for healthcare at the top of the heap, there’s certainly reason to ask questions as to where the money is going, especially with the big banks making all kinds of money, using new technologies, and yet the rest of the country still struggling.  I read this article today about the economy improving and the rolling back of emergency lending programs?  It doesn’t seem to jive with what I have been reading from other accounts and news stories.

The Federal Reserve is not a government agency, and I thought that was worth mentioning as many may not be aware of this.  The board is filled with Wall Street Bank Executives, that answer to the Treasury Department basically with no rules and regulations.  We have an SEC that is pretty much helpless when it comes to the ability to run data audit trails to verify and find where the money is going.  What is also interesting is the lawsuit filed by Bloomberg News mentioned, which would force the Federal Reserve to disclose details of the bail out, so far no action, but there are bills to audit the Federal Reserve for the first time, and how would this be done….algorithms.  It’s the only way it can be done.

Based on what I have seen and read lately as transparency seems to be bringing some new items to light, I am wondering if the entire crash last year of Wall Street was maybe planned and designed as the algorithms in place were beginning to fail without the assets to back the array of data used?  There were many healthcare businesses and hospitals hard hit by all of this and my big reason for concern, as many have not bounced back.  Again, when you look at how all this is run, it’s the algorithms that produce the information needed for decision making processes.  I know I use that word quite a bit here on this blog and I  hope if nothing else that readers will learn about how they affect everything in decision making processes, and there are 2 kinds of algorithms too, the good ones and the not so good or bad ones.  When I say bad ones, those are the ones that take into consideration money and profits only without a balance for human life and the quality there of.   The site does have data reports available, but how accurate are they and do the reports really give an accurate picture?

As we can see, big profits are right back in place and the government is struggling to afford healthcare, but in the meantime profits at the banking levels continue to flourish.  How does a group at the Federal Reserve intend in any way to bring about any regulations when the group is made up of executives from Wall Street I ask? How does an agency like the SEC function and be given any real “teeth” to pursue potential illegal activities on a full scale basis with the ability to electronically audit transactions, by checking the algorithms.

When data processes no longer are functional, it is common to create new systems to take over where the old leave off, look at the number of operating systems as an example we have been through with computers, financial algorithms in that respect are no different.  Algorithms can be written to show “desired results”, common fact and anyone who writes code can vouch for that fact.  Our executive branch is doing a good job in playing catch up in the technology department, but can they in fact gain the leverage and business intelligence to deal with the Federal Reserve?

The Algorithm Report: HealthCare and Other ...

Again, some thoughts here as time moves on about whether or not the fall was in fact planned to a degree as the algorithms needed to be revised at they were not creating the desired results, and again business intelligence software to the extreme have the capability of designing some very creative solutions, and perhaps those not in the best interest of the citizens of the US, but rather those that allow profits and big business to continue to pretty much run the country, diminishing the real power of a citizen to have a “vote” in our so called democracy.  These areas go way beyond what is exposed to us on the surface, believe me and I as much as anyone else out there would really like to see some transparency and see what the algorithms really created behind the scenes for the decision making processes used and perhaps the lawsuit filed by Bloomberg News will start paving that path.  BD

Do We Need a US Department of Algorithms?

Does that mean that there is no good solution? On the contrary, there is an easy solution that is proven to be effective. The problem is that absolutely no one in Washington is considering it: roll back the financial deregulation.
I'm not just talking about the Gramm-Leach-Bliley Act of 1999. We also need to roll back the Riegle-Neal Interstate Banking and Branching Efficiency Act of 1994, and the Depository Institution Deregulation and Monetary Control Act of 1980. 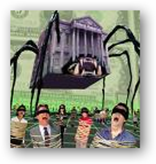 If we did all of that we would fix the Too-Big-To-Fail problem, the predatory lending problem, the usury rates that banks charge, and even tackle the out of control derivatives products. We would even break the control that Wall Street has over our politicians.

With no government body acting in the interests of the citizens of this country, a private body, Bloomberg News, filed a FOIA lawsuit to force the Federal Reserve to disclose details of its Wall Street bailouts. On August 25, a federal court ruled in Bloomberg's favor.
So far the Fed has not acted. They have until the end of the month to appeal.

Because of the Fed's attitude that it can give out trillions of dollars of taxpayer dollars without any oversight whatsoever, Congress has pushed back on the Obama Administration.
Bills to audit the Fed for the first time ever, HR 1207 and S 604, are getting traction in both houses of Congress.

Garrett Johnson: Just How Corrupt are the Bank Regulators?

(Reminder:  double click on any word in text on this site to get additional information, Wikipedia, dictionary, etc.)