This is an interesting combination and Bill Maher asks some pretty interesting questions:  “What made you flip?”  Mr. Potter speaks about Remote area Medical, which I featured quite a few posts about their noble efforts here in Los Angeles not too long ago.  You can also check out the widget on this site for any updates related to the stay in Los Angeles where they did a wonderful job! 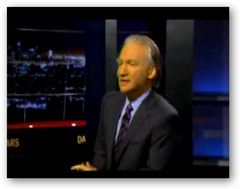 Bill Maher is funny in asking Wendell if this was a “blow job to the insurance industry'”, hey I just report this and asks if this was accurate, screen capture below, smile and laugh and Wendell says “yes” it is accurate.  Wendell Potter knows algorithms and how they are used.

With humor, Bill Maher reminds Mr. Potter even though this is HBO, to watch his language, funny. 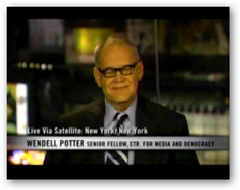 He states it is difficult to do what he did as far as being a whistle blower and talks about how employees get caught up in the mess.  We also have a Congress that is a bit in the dark about the laws as to how they might explore creating them. Here’s the laws in 1300 pages of verbiage, now go build your data silos, aggregate your data and make it work, duh?

He comments on Remote Area Medical that so many attending to receive services have insurance, but again it does not cover what healthcare they need.  Wendell also comments on how it was a bit scary to take the steps he has.  Here’s a screenshot of the widget that is on the blog here with their updates and information provided while in Los Angeles. 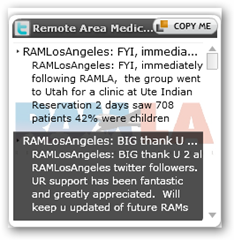 Bill Maher has Michael Moore up next week to talk about his new movie, “Capitalism, A Love Story” and Wendell says he got it right, Cigna paid for him to sit in the back rows to take notes when “Sicko” had come out in order to figure out a battle plan on how to discredit the movie.  If you caught Jay Leno this week, Michael Moore sang the old Bob Dylan song, “The Times are a Changing” and so are those algorithms.  BD

Is Distraction Getting in the Way of HealthCare Reform

The Algorithm Report: HealthCare and Other Related Instances