This is one of those bizarre sad tales, how in the world would a doctor do this?  The nurses were right on his trail too with noticing the watch being gone and reported to security.  The doctor was caught on security cameras outside throwing the watch into a grassy area and the watch was found.

The doctor, 32-year-old Cleveland James Enmon of Hermosa Beach, Calif. is also facing grand theft charges in the case.  It sounds like the evidence is 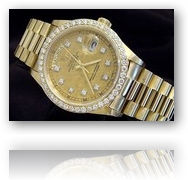 pretty well lined up here with what has been disclosed in this article.  This somewhat reminds me of one we had in Irvine a few years ago where a doctor left in the middle of surgery to run to the ATM machine, but the patient in that situation didn’t die.  I wonder if this doctor may have been on drugs or something to behave so strangely too.  Very sad for the family too when the doctor you count on to save a life is not there for you.  BD

Legal News for California wrongful death attorneys. A emergency room doctor is being accused of failing to resuscitate a man to steal his watch.

Stockton, CA—A St. Joseph’s Medical Center emergency room doctor is under fire by the family of a retired Manteca police Lieutenant who died from a heart attack last June. The family alleges the doctor did not resuscitate their father so he could steal his Rolex. The adult children of the retired police official filed a wrongful According to the lawsuit, Jerry Kubena Sr. was rushed to the St. Joseph’s Medical Center on June 1st for heart problems.

Emergency room physician Dr. Cleveland Enmon allegedly allowed Kubena to die from a heart attack after he noticed his Presidential Rolex watch on his wrist. Two nurses reportedly noticed the watch was missing from the body of Mr. Kubena, and that a bulge appeared in the doctor’s pocket. The nurses reported the missing watch to security, who then told everyone to remain where they are.

The lawsuit claims Dr. Enmons somehow slipped outside the hospital and walked into the parking lot, which was caught on the hospitals security cameras. A nurse decided to follow the doctor, and witnessed him throw something from his pocket into a grassy area in the parking lot. The nurse reportedly brought security to the area where she saw Dr. Enmom throw something, and recovered Mr. Kubena’s Rolex. Dr. Enmon was apparently confronted with the hospitals security footage, and was fired on the spot.