Acid Inhibitors Like Nexium, Prilosec, Prevacid and Protonix Prolonged Use – FDA Says Watch It With Prolonged Use

Bone fractures are the big call item here and it seems the longer the product is used, the greater the potential exposure would be.  The purple pills is kind of expensive too.  You can read more at the link about the marketing and prescribing news on the purple pill.

Drug Deals – Nexium and Teva Purple Pill Agreement, And What Is This Costing Us?

Consumer reports is trying to help you out with some affordable over the counter alternatives.  Astra

Zeneca already cut a deal with Ranbaxy to delay it’s release of a generic version of the drug.  Who’s on the list for the next deal I wonder?  The drug is the biggest seller for Astra Zeneca too, and we have all seen the massive TV commercial media on how it is effective, there’s been a ton of marketing done here to equate everyone with “the purple pill”.   Interesting too in this survey that Nexium made the list of 8 drugs doctors wouldn’t take themselves…hmmmmm.

There are some other alternatives for GERD though, like surgery and devices.

If you are one that has chronic GERD, maybe looking into these areas might be worthwhile as this is where the FDA notice seems to be placed, on prolonged and frequent use.  BD

The Food and Drug Administration cautioned Tuesday against prolonged use or high dosages of the family of acid reducers called proton pump inhibitors, a family that includes such well-known drugs as Nexium, Prilosec, Prevacid and Protonix. The agency said it would order revised labeling on packages of the drugs to reflect the fact that they have been associated with an increased risk of fractures of the hip, wrist and spine. 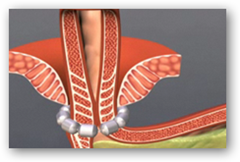 Other drugs in the family include Losec, Zegerid, Aciphex and omeprazole. An estimated 113.4 million prescriptions for the drugs are written each year and large numbers are sold over the counter.

The drugs block the production of acid in the stomach and provide important benefits for many people with conditions such as erosive esophagitis, nonsteroidal anti-inflammatory drug-induced ulcers and gastroesophageal reflux disease. But most people take them primarily to control heartburn.

Two newer drugs, esomeprazole and dexlansoprazole are now being evaluated specifically for their effects on bone and results are expected by the end of 2011.