The role of the pharmacy benefit manager is indeed changing on the landscape today.  In this circle we have the usual clinical information value, the cost and last but not least the marketing to the consumer or patient.  DNA testing is slowing working it’s way into today’s landscape of healthcare.  Pharmacy benefit managers see several areas on this landscape to where they can potentially fill some voids, and this will change as research and new tests become available as new markers are identified. 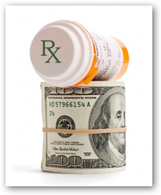 In the news lately too we are also seeing some different affiliations with health insurance companies.  What I found interesting was all the fuss over the DNA box being available on the shelf at Walgreens.  The fact that having the “box” available on the shelf making such striking news coverage was amazing, more so in the fact that it still requires an online registration and all the same availabilities that companies have already been offering, the only difference is that instead of the company mailing the “box”, you get started with a box off the shelf, amazing the amount of coverage this received.  We also have the labs in the business of stretching their offerings into the area of genomics too with new tests being made available.

We are also seeing a more extensive effort being put forth with some hospitals offering training and education for doctors too.

DNA testing and personalized medicine stands to change the way doctors prescribe medicine for sure, with information available to narrow down a selection of treatment therapy and not giving a patient a drug that due to their DNA genomic structure will not be effective.  This is what the testing was designed to do as personalized medicine evolves; however it’s not the only game in town either, cost is right in there as well.

Insurance companies now are taking a look at the cost side and are exploring some of these areas with the pharmacy benefit managers.  The insurance companies can only go so far with the GINA laws and their new partners for information appear to be in the area of the PBM; however, how all this works is continuing to develop.  The pharmacy benefit managers more than likely will be playing a larger role with the physicians with information about prescribing drugs for patients, again based on genomics and possibly recommending that certain patients be given certain tests.  It gets a bit complicated here as the payers are still in their own rite, trying to figure out which tests they should allow, and again this is based on cost.  Getting a prescription for some simple allergy relief one day might become a very complicated issue with having a multitude of data to look at before that prescription is written.

Next up, privacy with sharing patient information with payers and how this will get utilized too, as a payer will need to know, or want to know that a DNA test shows before potentially allowing some medications and treatments to be covered, especially when it comes to areas like oncology for example where the cost is high.  CVS has affiliated itself and through the Minute Clinics has an arm to provide DNA testing within the stores/clinics.  You may have a provider wanting to prescribe a certain medication and a negative given for coverage based on a DNA test on file, just some new potential conflicts that could be on the horizon as interpretations are queried.

“Clinical services including genetic testing will be introduced to CVS Caremark's health plan and employer clients in the second quarter of 2010. Services could be used for clinical benefits such as identifying patients who do not respond to certain therapies and thereby avoid disease progression from HIV or prevent cancer recurrence. Clients would pay for the testing.”

In addition, Generation Health is working with labs to provide an inexpensive network whereby patients can have tests done that are acceptable to the insurance carriers.  Business intelligence analytics also enters the picture here for risk management and containing cost.  With healthcare reform action currently taking place, the new “left hook” enters the picture as some areas now will become a bit grayer as far as the ability to enforce privacy laws and overall just to protect the consumer.  There’s also the marketing that will follow as this means money too, so perhaps not too long from now you could be marketed in your local retail

drug store chain to get your DNA done now and all the benefits you could reap, along with all the smiling pictures of people that have, standard marketing procedures today with pictures of happy smiling people where ever you go.

We could see this even continue to expand to the point to where cost as it is being viewed today will almost be pushing consumers into having their DNA tests done in order to get certain prescriptions, but we are not there yet.  This is a bit of a game changer and the effects remain to be seen, but hopefully it will be done in a fashion to create better care and not just be another bottom line risk management assessment to save money.  There’s always the interpretation with genomics and DNA tests, and this is where the attention will need to focus so we don’t have conflicts here and interpretations used to deny access to certain expensive drugs when in fact they are needed by the patient.

This is an item we can safeguard now, as we know that extensive algorithms are run everywhere in healthcare today before anyone gets duped with “desired” results versus “accurate” results in an effort to cut costs only and putting care secondary.

A couple years ago I had the opportunity to talk with Dr. Patrice Milos of Helicos, their Chief Science Officer and that was one of my big questions for here, what about the interpretation and she stated we discuss and talk about that topic quite frequently themselves.  Interpretation on DNA and genomic testing will indeed be a hot topic today and down the road as one DNA testing could possibly lead to a difference of opinion in some areas as testing becomes more complex with new markers and some markers offering information on more than one treatment plan.

Pharmacy Benefit Managers are some of the most profitable portions of the business of healthcare today and as this article suggests a name change relative to what PBM’s do down the road could be in the cards.  BD

With more attention paid to pharmacogenomics and its impact on specialty therapies, particularly oncology drugs, PBMs have begun to expand their capabilities in this space by collaborating with or acquiring companies providing genetic testing services. As a result, more PBMs — and health plans — may begin to view this knowledge as a core competency.

Ryan Phelan, DNA Direct CEO, tells SPN that there are educational opportunities for physicians as well. With many providers untrained in genomics, “physicians have a lot of questions,” she says. Her company “help[s] in the decision-making process and the education process,” she explains.

“The PBMs are in the interesting position of being able to capture prescriptions at a very early stage. The PBMs have an outreach opportunity to patients and physicians to make suggestions, and in the future, I suspect, requirements that certain genetic tests are performed before the drug choices are finalized.

PBMs, he says “will nibble around the edges of the medical benefit, pulling into their contract what they can — meaning what payers will allow.”

And Medco’s recently opened oncology-focused Therapeutic Resource Center in Whitestown, Ind., and its Advanced Oncology Solutions product will be “completely synergistic” with DNA Direct, he says. “This is right in the strike zone for cancer patients.”

Generation Health and DNA Direct could offer CVS Caremark and Medco “a point of differentiation” among PBMs, Vogenberg says. But “for now, health plans don’t see a compelling need to enter this area. Alternatively, there is an opportunity for others to contract out for that limited service offering when needed.”

First, because “not all payers…are sophisticated buyers of health services, there will always be a place for nuts-and-bolts, hold-the-fancy-stuff” PBMs. Second, the deeper PBMs get into genomics, the more “they will be in prescribers’ faces” with regard to “how to practice medicine,” so resentment from providers could be an issue. And finally, “maybe the largest PBMs are evolving into something other than what the original term ‘pharmacy benefit manager’ meant,” he says. “That no longer covers what these companies do, and it certainly doesn’t cover where they’re going.”

As Genetic Testing Picks Up Steam, PBMs Boost Their Capabilities