I just said this about a month ago how the FDA could collaborate with other government entities to help with some of their processes and procedures and here’s a perfect example and somewhat right in their own backyard.  The hope is to have a device the size of a glucose meter to use to do on the spot testing. 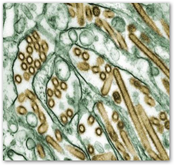 The devices are already showing an excellent track record when used 24 hours ahead of when an infected patient becomes symptomatic.  Use for the military is said to be the priority but with the speed that other devices in healthcare are being created and implemented, I don’t think there will be much of a gap here.

They are talking even about a device that attaches to the telephone to diagnose and the article mentions this is moving so fast that the FDA has no benchmarks for genetic tests and may not know what to do, so perhaps an early visit over to the Pentagon would be beneficial here to see what other agencies have in the works.  It’s all about collaboration today at rocket speeds.

30 genetic markers have been identified with blood samples, that are activated by a virus. BD

Imagine knowing you’ll be too sick to go to work, before the faintest hint of a runny nose or a sore throat. Now imagine that preemptive diagnosis being transmitted to a national, web-based influenza map — simply by picking up the phone.

That’s the impressive potential of an ongoing Pentagon-funded research project, spearheaded by geneticists at Duke University. Since 2006, they’ve been hunting for a genetic signature that can accurately assess, well before symptoms appear, whether someone’s been infected with a virus. Eight months into a $19.5 million grant from Darpa, the Pentagon’s out-there research agency, the expert behind the program is anticipating a tool with implications far beyond military circles.

Dr. Geoffrey Ginsburg, director of Duke’s Institute for Genome Science & Policy, is collaborating with a team of colleagues to create a gadget that can detect viral infection hours before the sniffles. Between 2006 and 2009, his team made rapid strides in identifying 30 genetic markers, found through blood samples, that are activated by a virus.

They’ve since moved to human trials, testing 80 people in four studies. Healthy participants were exposed to three different viral strains. Their blood, saliva and urine were then tested for “viral specific signatures,” that would characterize illness.

“This would eliminate the ‘default’ of giving antibiotics, which is a significant public health concern,” Ginsburg said. “So what we’d have, essentially, is a tool to drastically improve clinical judgment in a day-to-day setting, which wasn’t a Darpa goal, but a corollary benefit because we had a chance to find these specific signatures.”

And Ginsburg has a more elaborate vision for the devices, which he hopes to see shrink down from “suitcase size” to that of “a diabetic glucometer,” which would use a finger pinprick to test for illness.

Ginsburg anticipates a suitcase-sized device in the war-zone within “a couple years,” and says the devices are already showing excellent accuracy 24 hours before an infected patient becomes symptomatic. In an effort to validate the results in a real-world setting, his team has turned to Duke’s campus, using crowded dorms — already human petri dishes of infection — as improvised research labs.

“The major uncertainty, in my mind, is the regulatory atmosphere,” he said. “These are such a new diagnostic tool, the FDA is still trying to figure out not only how to supervise them, but whether they even need to.”