Many members of Kaiser have been asked if they want to participate in this study, and the results of which are going to be used for genomic research.  The information when all culminated will contain information without any personal data included.  Actually the request for donations started back in 2008.  This is to be 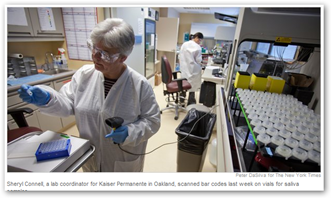 the largest study of it’s type.

All patients had to do to participate was to spit into a container sent to them by mail and return it to Kaiser.  As the article states though, participants will not have the ability to see their results as again this is being done to allow scientific analysis and not necessarily for patient treatment at this point.   Kaiser was given a grant of $25 million from the NIH to conduct the project as part of a stimulus package.

Additional members will be asked to contribute later as they intend to build a repository for blood samples, in other words when patients come in to have blood word done, they will be asked if they want to participate and give a DNA sample at that time.  The processing of the DNA has all be set up to be “robotically” processed and it further states here that 2500 samples can be tested per week, pretty amazing number.  As mentioned here too their biggest fear is a power failure as the cost per each individual analyzed is around $10,000.  BD

This month, researchers at Kaiser Permanente in Oakland and the University of California, San Francisco began the highly automated, large-scale process of analyzing that DNA, which is being extracted from tens of thousands of saliva samples donated by Kaiser members in Northern California since 2008.

Each sample of ordinary spit is laden with cells containing the volunteer’s entire set of genes, their genomes, which carry in sequences of DNA the coded instructions for building and maintaining life. The hope for this so-called genome-wide association study is that, when the genes of people with diseases like cancer and multiple sclerosis are compared with the genes of those in good health, computer analysis will pinpoint genes responsible for the illnesses.

Following instructions found in a kit mailed to her Oakland home, Mrs. Young deposited the requested spit into a special plastic cup. She sealed it with a blue lid fitted with a built-in preservative and sent it back to Kaiser. Along with her saliva, the samples from the other 130,000 people began arriving in Kaiser’s mailbox. 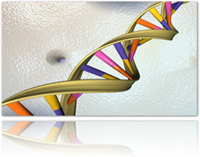 However, the study has begun just as some scientists have started to question the value of these experiments, and when private ventures, like 23andMe, are struggling to find a consumer market for gene tests.

David B. Goldstein, a Duke University researcher, said he believed “interesting and valuable information” would come from the Kaiser study, but he questioned whether it was the most efficient way to gather information about the genetic links to disease. “It’s an awfully expensive study,” Dr. Goldstein said in an e-mail message.

In the coming years, 400,000 more members will be asked to contribute their DNA to the project when they come in for routine blood work. Kaiser is spending $9 million to build a repository for the blood samples.

At the Kaiser research lab, a production line of robotic equipment has been set up to process the 130,000 cups of saliva that have been mailed by patients and stored, at room temperature, in racks of cardboard “pizza boxes,” 50 cups to a box. Here, the robots draw out a sample of spit, and chemically process it to extract the donor’s DNA.

At Dr. Kwok’s ninth-floor lab, three sets of robots prepare the DNA samples shipped from Oakland. The full complement of DNA from each volunteer is washed over a custom-designed silicon chip about this size of small fingernail. Microscopic wells etched into the chip are each engineered to pluck out one of 675,000 possible gene variants.