In addition to the dressing in white lab coats and strategic seating arrangements, it is alleged that the company made some software changes to not have certain activities recorded when talking with physicians.  What is also worth a note is the instructions about not to accidentally pith FDA officials, so all were made aware of 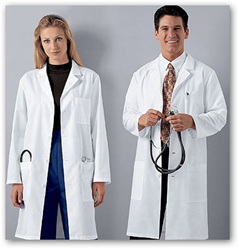 who they were and where they were.

This is an interesting case filed yesterday and I’m sure we will hear more.  The most serious part of the entire case looks to be the alleged recommendations for treating patients by the reps wearing the white lab coats.  BD

The whistleblower suit filed against Pfizer (PFE) yesterday over alleged off-label sales of the kidney transplant drug Rapamune reads in part like a spy novel. It describes the cloak-and-dagger methods that the company’s employees allegedly used to persuade doctors to use the drug in ways they shouldn’t, including disguising reps as white-coated doctors, altering sales software to prevent off-label material being recorded, and arranging dinners at which the seating plan was controlled so that guests would always sit next to a doctor who was already enthusiastic about off-label use.

The most sinister allegation in the case comes in the form of a description of how far Wyeth went to infiltrate the ranks of kidney transplant doctors and nephrologists, including wearing lab coats and making treatment suggestions for hospitalized patients.

…Wyeth management “upgraded” Salesworks, which was an electronic company system designed to record physician “calls” by TAMs. The “upgrade” was made so that TAMs could no longer place details about sales issues discussed with physicians in the notes section. Relator Sandler believes that the change in the system stemmed from Wyeth’s fear that the Company would be charged with off-label marketing several Wyeth drugs, including Rapamune. Wyeth management also advised TAMs not to use “alternative” methods like “handwritten notes or e-mail” to commemorate the selling interaction. Wyeth justified the change in Salesworks by stating, “[w]e believe that it is appropriate and will serve the Company’s best interests in the future.”