First off, if you need followers that bad you are in trouble here.  Second of all, I don’t want to see this in the areas I follow so do everyone a favor and make it a 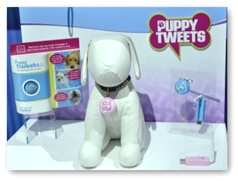 “private feed” if you would as I don’t want to follow my own dog, much less anyone else's.

Mattel is the genius with this idea and the cost is around $30.00 and it comes in pink for females and blue for males.  It can detect around 500 different types of activities so your dog can join the 140 character club called Twitter.  “Guess what I am licking right now” “I need to poop” could very well be a couple of the pre-sets of text you will receive.  It has a USB dongle and I think it is soon to be released.  It requires a Wi-Fi connection to your computer and it hangs on the dog’s collar.

I am dog person and love my dog, but this is not for him.  If tweeting is not enough, then there’s another product which is a camera which you can hang around his neck and view where he’s moving all day.

Spy on Your Dog – Home Monitoring Devices for those Guys Too

Dogs are therapeutic if you let them be without having to tweet and and spy on them when you are not home, or that’s how I think and either one of these would probably make my dog mad and he would pee all over the house(grin). 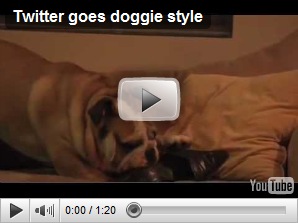 In its first-ever toy created for the canine community, Mattel is introducing a product called "Puppy Tweets" that meshes the hugely popular Twitter with consumers' love of pets. 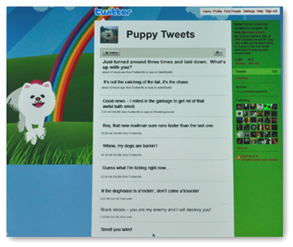 Puppy Tweets is a plastic tag with a sound and motion sensor that you attach to your pet's dog collar and connect its USB receiver to your computer. Then you create a Twitter account for your dog and enjoy updates all day from Sparky or whatever its name is on your computer or smartphone.

If Sparky is napping, he'll tweet "Somedays it feels like my paw is permanently on the snooze button!" If he's making a ruckus, his tweet will let you know that as well, saying"YAHOOOOOOO! Somedays you just gotta get your bark on."

"Puppy Tweets capitalizes on two popular trends - the use of social media and real time communication, as well as peoples' extreme love for their dogs," said Susan Russo, Mattel's director of marketing