Due to what is going on in the news today with oil rigs today everyone can relate to having a doctor remotely available for workers far out away from land.  As the 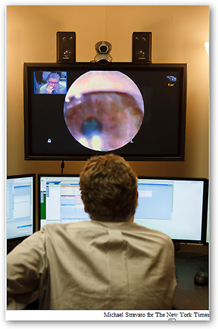 article here discusses there are many levels of technology that can be used from simple low resolution web cams to more expensive set ups.  Our governor in California participated in checking out what one HMO is doing here recently.

A couple weeks ago we had Planned Parenthood using telemedicine with dispensing and counseling young women with their choices and using the webcam to verify that the pill had been taken.

Not to be left out, Verizon is also working with Cisco and UnitedHealthGroup has invested several millions of dollars in the technology as well, beginning last year.

In addition to the basic telehealth webcam visits, some hospitals are using a combination of robots and the telehealth connections.  In Orange County we have one hospital that was accredited due to having a telemedicine robot available.  The robots of course are using some high resolution cameras and have diagnostic hardware that can be used like a stethoscope that can send your heartbeats over the web to a physician.  One patient had cancer inside their mouth and the camera on the robot was able to identify it to the doctor at the other end.

The video below shows how the robots are being used at UCLA and give you an idea how this functions.  In California, prisons are investing in telemedicine as this makes sense, anywhere where you can’t have an on premise physician available telemedicine can step in.  Granted it will not take the place of in person visits all the time but it certainly has it’s place. 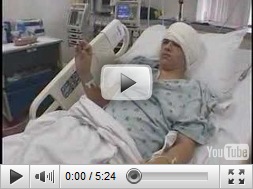 Below is a video showing how a visit with a doctor works with an oil rig employee and the physician.  Get your web cam ready to go.  BD

Spurred by health care trends and technological advances, telemedicine is growing into a mainstream industry. A fifth of Americans live in places where primary care physicians are scarce, according to government statistics. That need is converging with advances that include lower costs for video-conferencing equipment, more high-speed communications links by satellite, and greater ability to work securely and dependably over the Internet.

“The extreme pain strongly suggested a kidney stone,” Dr. Boultinghouse said later. A urinalysis on the rig confirmed the diagnosis, and Mr. Martin flew to his home in Mississippi for treatment.   He could, though, get in touch with a doctor thousands of miles away, via two-way video. Using an electronic stethoscope that a paramedic on the rig held in place, Dr. Oscar W. Boultinghouse, an emergency medicine physician in Houston, listened to Mr. Martin’s heart.

Mr. Martin, 32, is now back at work on the same rig, the Courageous, leased by Shell Oil. He says he is grateful he could discuss his pain by video with the doctor. “It’s a lot better than trying to describe it on a phone,” Mr. Martin says.

Although telemedicine has been around for years, it is gaining traction as never before. Medicare, Medicaid and other government health programs have been reimbursing doctors and hospitals that provide care remotely to rural and underserved areas. Now a growing number of big insurance companies, like the UnitedHealth Group and several Blue Cross plans, are starting to market interactive video to large employers. The new federal health care law provides $1 billion a year to study telemedicine and other innovations.

NuPhysicia uses equipment in the middle of that range — standard videoconferencing hookups made by Polycom, a video conferencing company based in Pleasanton, Calif. Analysts say the setup may cost $30,000 to $45,000 at the patient’s end — with a suitcase or cart containing scopes and other special equipment — plus a setup for the doctor that costs far less.

Dr. Boultinghouse dismisses such concerns. “In today’s world, the physical exam plays less and less of a role,” he says. “We live in the age of imaging.”

Some rigs have saved $500,000 or more a year, according to NuPhysicia, which has contracts with 19 oil rigs around the world, including one off Iraq. Dr. Boultinghouse says the Deepwater Horizon drilling disaster in the Gulf of Mexico may slow or block new drilling in United States waters, driving the rigs to more remote locations and adding to demand for telemedicine. 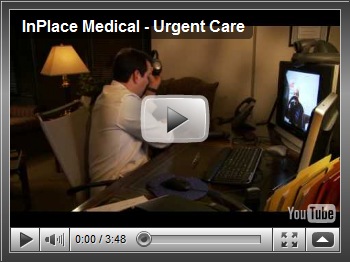 Working with Dr. Boultinghouse, Dr. Davis and other university doctors conducted more than 600,000 video visits with inmates. Significant improvement was seen in inmates’ health, including measures of blood pressure and cholesterol, according to a 2004 report on the system in the Journal of the American Medical Association.

In March, California officials released a report they had ordered from NuPhysicia with a plan for making over their state’s prison health care. The makeover would build on the Texas example by expanding existing telemedicine and electronic medical record systems and putting the University of California in charge.

Healing by 2-Way Video - The Rise of Telemedicine - NYTimes.com