Devices That Record and Report Data – Alcohol Compliance and Reporting Via Sensors, Games And Voice Decoding

This has been all over the news this week with celebrity cases and in healthcare we have many new and developing devices that record data.  2000 appears to be the decade of the sensors.  As this article mentions, parents inquired about getting a device for their teenagers.  Right now only the courts can use and require such

devices and it is meant as a way to avoid over crowding in the jails.

What is interesting as we read about cuts in budgets and spending all over the country, in the device area spending is increasing as it allows technology to do the work.  Life is a game today as they say and there’s also a game being tested by the VA to educate and help people with alcohol problems.

Now if this is not enough on sensors, there’s also another new product that will use voice decoding to give “your present state of mind” that I posted about a couple weeks ago.  I question a bit of their claims as far as being able to use voice tones to find “prostate cancer” though and expect that this may be played down a bit as the FDA would need to approve this type of use, but the marketing states a 75% chance of finding prostate cancer.

In essence, you could combine both the Scram Unit and this for actual voice conversations and there will be nothing left to the imagination and everything will be analyzed to the furthest degree.  Right now the units require their own base station and are somewhat similar to what we look at here with remote home monitoring, but of course not for the same purpose and I might guess in time the monitoring could even be signaled to go to a cell phone for data reporting purposes as well.  Again, privacy and using devices has to be done properly, otherwise with the demand for control could easily get out of hand with monitoring going on maybe in a fashion where it should not be.   The participant pays for the service, so in essence there’s not a big expense to the court system.

For testing there are all kinds of other devices being developed too.

Alcohol companies too are marketing like we have not seen before with items such as vitamin enhanced vodka and we see reports where alcohol in moderation can also help alleviate Alzheimer's disease too.

Porch Crawler – Best of Both Worlds? Get Your Vitamin B with Vodka and Fix Your Bones with Beer

Here’s some information from some recent studies….

Don't Drink Alcohol? You Have the Higher Risk of Depression – Study and Survey

Here’s also a use for using vodka as a treatment for some minor issues, so it’s not all bad, just don’t drive under the influence.  As much as the compliance area is working with technology, the marketing for consumption is moving at the very same pace.  BD

The Medicinal Side of Vodka – No Cocktails Here….

NEW YORK – If an alcohol-monitoring bracelet can keep celebrities like Lindsay Lohan from drinking, some parents might wonder, Can I get one for my teen?  The answer is no.

For the time being, the ankle bracelets are only sold to the courts, probation officers and others who want to make sure drunken drivers or anyone involved in alcohol-related offenses don't drink again. 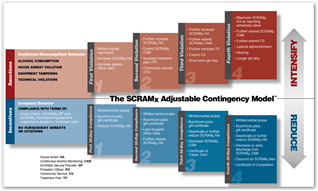 The gadgets are much like the better known electronic ankle bracelets that have been used for years to restrict suspects or parolees to their homes. (The alcohol bracelets can now do that too, if needed.)

The bracelet uses the same technology as a Breathalyzer, but instead of checking the breath for alcohol, it samples the perspiration on the skin. After alcohol is consumed, it eventually enters the bloodstream and a small amount is expelled through the skin.

The bracelet tests the skin every half hour. If there's alcohol, it causes a chemical reaction in the device's fuel cell. Usually once a day, the information is sent over phone lines to the company, which alerts the courts or probation officer if alcohol is detected at a blood-alcohol level of 0.02 or higher.