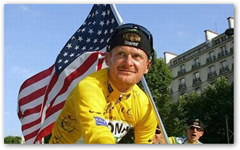 their performance.  In a way, this is just like the internet, as soon as restrictions are put in place, there’s someone else out there to figure out how to get around it.  The sad part about this story is the fact that the emails claimed that Lance Armstrong, who is everyone’s hero and if anyone needed transfusions, it may have been related to his battle with cancer, but as more rolls out I guess we may hear more details.

This is certainly starting out to be decade of transparency and true to form following with “sensors” so if someone didn’t email it, expect images or a data record of a sensor somewhere along the line to tattle.  BD

Floyd Landis, the American cyclist whose 2006 Tour De France victory was nullified after a positive doping test, has sent a series of emails to cycling officials and sponsors admitting to, and detailing, his systematic use of performance enhancing drugs during his career. The emails also claim that other riders and cycling officials allegedly participated in doping, including seven-time Tour de France winner Lance Armstrong.

After the Tour De France stripped Mr. Landis of his 2006 victory for testing positive for elevated levels of testosterone after one crucial stage of the race, the U.S. Anti-Doping Agency gave him a two-year ban from the sport. From the moment the positive test was revealed, Mr. Landis has denied publicly ever using performance enhancing drugs.

He claimed he was instructed by Mr. Bruyneel how to use synthetic EPO and steroids and how to carry out blood transfusions that doping officials wouldn't be able to detect. Mr. Bruyneel and Mr. Johnson could not be reached for comment.

Cyclist Floyd Landis Admits Doping, Alleges Use by Armstrong and Others - WSJ.com