Home » Medically Related » Other Items of Interest » Technology » Red Flags Rule Lawsuit Filed Against the FTC – A Need for Algorithmically Centric Laws so We Have Working Examples, Visuals and Tier Levels Established for Areas of Enforcement and Compliance

Red Flags Rule Lawsuit Filed Against the FTC – A Need for Algorithmically Centric Laws so We Have Working Examples, Visuals and Tier Levels Established for Areas of Enforcement and Compliance

Obviously this is not a “one size fits all” law here as practices, hospitals and facilities come in different sizes and flavors today.  What may be normal and standard 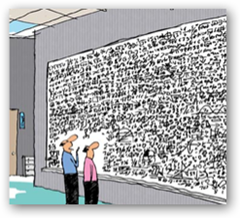 operating procedure for a large facility, works a hardship on a small office.  One of these days we might get to that understanding and have some “meaningful implementations” with healthcare along with meaningful use.

If you have laws with some digital capabilities added in besides all the huge amounts of text, interpretation sure would be a lot easier and maybe would cut down on some law suits and save some money.

The entire purpose of the law is not bad, but just not specific enough to accommodate all who fit into different categories here.  The other side of the coin borders on ethics practices too with doctors and patients with the area we call “trust”.  Lawyers are exempt so it does bring up a good question here, why not doctors, or have is the billing and reimbursement side of the healthcare business so strong now that ethics with human trust are out the door?

In the normal course of business, practices certainly are going to get their information and facts as they will want to bill for reimbursement,  but again I look at the compliance side with the data portions here and this could put a financial strain on some practices and doctors with an additional identity as a “creditor”.  BD

Medical and osteopathic associations today sued the Federal Trade Commission for covering them under the Red Flags Rule, which will require them to start verifying their patients' true identities before they agree to treat them. Enforcement begins June 1.

The lawsuit seeks to prevent the FTC from defining physicians as "creditors" whenever they do not require payment in full at the time they provide care, and later bill them, according to the brief filed by the American Medical Association and the American Osteopathic Association and the Medical Society of the District of Columbia, the District Court where the case was filed.

The physician groups say that the rule requires them to set up identity theft prevention and detection programs, which aren't necessary, and said the FTC was "arbitrary and capricious" in extending the application of the law to them. Also, the extension of the Red Flag Rule to doctors would do nothing to improve care, the physician groups say.

Mills says that healthcare providers are already bound by the Health Insurance Portability and Accountability Act, which requires patient information be kept confidential, and several other rules. "So why implement another unfunded mandate to keep medical information secure when it is already confidential?" Mills asks.

The AMA and several other health provider groups petitioned the FTC in March for a similar exemption, but were not successful.

According to the lawsuit, complying with the Red Flags Rule "imposes significant burdens on physicians, particularly sole practitioners, and those practicing in small groups."