We have pie chart to look at here.  The red means zero.  The other colors break down the category of where doctors are with medical records and look at how many have the fully functional EHR – 6%.

Now that is not to say others are not far behind them as they are with 21% and 17% having basic and partial EHR systems, so 44% have something going on here.  This is actually a big step compared to the numbers just a few years ago.  My only wish though is that the EHR software companies would get smart and include one big shredder with every system they sell so I could stop reporting on those folks that burn their houses down and other oddities that arise with trying to get rid of the paper side of the business (grin).  BD

Calculating market share for the electronic health record (EHR) market is no easy task. There are over 300 software vendors, many market segments (consider: size of practice served, specialties services, inpatient/outpatient) and very “fuzzy” sources of data.

Nevertheless, the team at Software Advice set out to see what numbers we could pull together. We limited our analysis to the outpatient EHR software market. Moreover, we decided to measure market share based on the number of physicians users, rather than vendor revenue or other metrics. We tried to keep it simple. It’s not.
First, let’s define the total size of the market we are analyzing. Of the approximately 788,000 physicians in the United States, 65% of them work in an outpatient facility or physician’s practice, according to the Bureau of Labor & Statistics. That’s 512,000 possible physicians who are in the outpatient EHR software market.

According to a recent study of office-based physicians released by the Center for Disease Control and Prevention (CDC), 44% of those of 512,000 office-based doctors had adopted either a partial, basic, or fully functional EHR system. That’s 225,000 outpatient doctors using an EHR to some extent. Here’s how EHR adoption breaks down among the total number (512,000) of outpatient physicians in the United States: 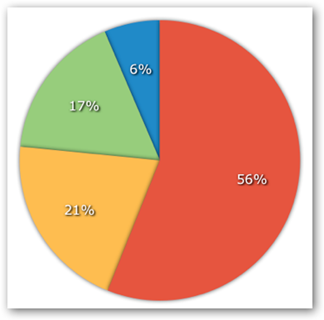