All enrolled had chronic hepatitis C infections and had never been treated for the disease.  As noted the cure right now with standard therapies is stated to be worse than the cure, thus many did not want to endure flu like symptoms for an entire year.

It appears here the time needed to take Telaprevir is 12-24 weeks, which cuts down on the treatment time and the company plans to submit to the FDA during the second half of this year.  Side effects of the treatment are fatigue, rash, itching, nausea, headache and anemia.

The drug works by applying an enzyme blocker on the virus, a protease inhibitor.  Cutting down the treatment time for a cure is big plus with any treatment.  BD

Vertex Pharmaceuticals has finally got the definitive proof it needs to say it has made a breakthrough for hepatitis C patients. The Cambridge, MA-based biotech company said today that its experimental drug for the chronic liver damaging disease was able to cure three-fourths of patients in the last stage of clinical testing required for FDA approval.

Vertex’s telaprevir compound, when given in combination with two standard drugs, was able to eradicate any detectable sign of the hepatitis C virus in 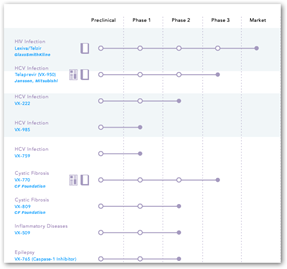 the blood for 75 percent of patients a full 24 weeks after they completed their course of therapy, Vertex said today in a statement. That is compared with 44 percent who did that well on a typical 48-week course of the usual drugs, pegylated interferon alpha and ribavirin. The results, which essentially represent the rate of clinical cures, were from a pivotal study of 1,095 patients known as “Advance”.

“These first Phase 3 results are important for people with hepatitis C, as they represent a potential new era of therapy where doctors may be able to use direct acting antiviral medicines to improve treatment and help patients potentially avoid life-threatening liver-related consequences,” said Ira Jacobson, the chief of gastroenterology and hepatology, at Weill-Cornell Medical College, in a Vertex statement.

“These results for telaprevir show that 75 percent of patients in the 12-week telaprevir arm achieved a viral cure, with the majority receiving only 24 weeks of therapy, marking what we believe may be a potentially dramatic improvement in the future treatment of hepatitis C,” Kauffman said in the statement.

Telaprevir is an investigational, oral inhibitor of HCV protease, an enzyme essential for viral replication, and is being developed by Vertex Pharmaceuticals in collaboration with Tibotec Pharmaceuticals and Mitsubishi Tanabe Pharma. Vertex plans to submit a New Drug Application to the U.S. Food and Drug Administration (FDA) for telaprevir in the second half of 2010 for both treatment-naïve and treatment-failure patients.