Aetna and Blue Shield are each increasing premiums 18% on average this year, but some  Aetna customers who renew policies this summer will see increases of as much as 23%.  Kaiser Permanente is raising rates 12% on average. Health Net Inc. said its customers would see "low double-digit rate increases."  No word yet from UnitedHealthcare on their increases and we have all heard the ups and downs of Blue Cross in California.

The same types of increases for small businesses are also being felt outside of California.  Blue Shield clients as noted below are looking as some huge increases as 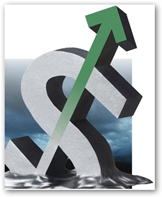 high as 76% and I wonder how many the carrier will keep at those rates.  BD

Small businesses in California are being hit this year with double-digit hikes in health insurance costs that could hurt the state's economic recovery as companies curtail plans for hiring and expansion to pay their insurance bills.

Five major insurers in California's small-business market are raising rates 12% to 23% for firms with fewer than 50 employees, according to a survey by The Times.

Similar increases are being felt by many small businesses across the nation, including those in Texas, Ohio and Florida — mainly the result of escalating costs for medical care and pharmaceuticals, insurers say.

In California, some small businesses say they are stunned by their latest insurance bills. Longtime customers of Blue Shield of California, for instance, are facing rate hikes as high as 76% after the insurer lost money on a handful of plans.

Financial pressures are also squeezing Tessier Cabinet Co., a 59-year-old family business in Montclair. Its president is reluctant to hire because of weak demand for his goods amid a 14% rate hike from Kaiser Permanente. "I'm ready to hang it up," Dan Tessier said.

California insurers defend their rate hikes as sound and fair, saying they struggle to balance affordable rates with the need to remain competitive and turn a modest profit.