The acting business has also been hit by the economy with more reality shows and now many are working between both unions to get enough work.  In order to qualify for health insurance, a certain earning threshold needs to be met.  Now there are talk going on about a potential merger – for health insurance benefits.

Being able to get health insurance benefits means either getting or not getting one job sometimes.  BD

Actors find it increasingly difficult to meet earnings thresholds for receiving benefits, because their income is carved up between the unions. That's one reason a merger is again under discussion. 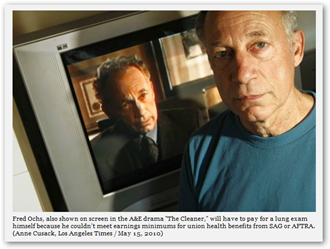 But now they are finding it increasingly difficult to meet the earnings thresholds required for receiving benefits, which range from about $10,000 to $30,000 a year, because their income is carved up between two unions. Each union has separate health and pension plans, and they don't allow contributions to be combined.
"People are very, very upset and worried," said Kevin E. West, founder of the Actors Network, a professional business organization for actors. "It's a huge problem that affects several hundred working actors."

Both unions have steadily raised earnings requirements for insurance at a time when reality TV programs have taken away jobs, movie stars increasingly are filling guest star roles on TV shows and the income that actors get from residuals — the fees paid out when shows rerun — has shrunk.