I had posted already about the AMA offering forms and help and if you are in California, the CMA has some additional information and help available.  As noted in the article they are taking the lead here in pursuing the same type of settlement with Blue Cross since they also used the Ingenix data base.  United had real good thing

going here for a while as they not only short paid, but made money from the Ingenix software license from all the other health insurance companies who paid for those services to calculate.

Court cases like this is the reason I plaster the world “algorithm” in the middle of my blog so folks will understand what is happening here.  Nothing gets done until the algorithms that calculate get adjusted.  I actually did a radio show talking about this a couple months ago. We are folks running around with sword and dagger technology, working against those (insurers and Wall Street) that have machine gun technology and law makers that I think are trying to figure out the difference between a machine gun and a sword as they are predominantly “non participants” that don’t compute very well.

What perplexes me is all this action going on here with folks being ripped by technology and algorithms and yet we give this same company contracts “to prevent and find fraud”?  Does this make sense to hire hacker all the time?  It is what we are doing so no wonder there’s absolutely no trust from consumers.  There are other companies out there who can provide this anti fraud services too, so again I ask what’s up with this?  Doesn’t make us look too smart does it?

We all know what dirty algorithms are by now or at least we should as the Madoff case with those responsible for auditing and policing taught a big lesson there.

Physicians will soon be able to get their share of a $350 million settlement with UnitedHealth Group. The settlement is the result of a class action 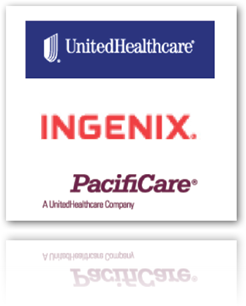 lawsuit, initially filed in 2000 by AMA and other health care provider and patient groups, alleging that United conspired to defraud consumers by manipulating out-of-network reimbursement rates and shortchanging physicians and patients by hundreds of millions of dollars over the past 15 years.

A hearing to determine final approval of the settlement is set for September 13 in U.S. District Court in New York. Doctors have until July 27 to file any objections to the settlement or opt out. The deadline to submit claims for payment from the settlement fund is October 5.

Notwithstanding the large settlements and broad prospective relief secured from United and Ingenix, there remain several other wrongdoers. As noted the Congressional committee found the use of Ingenix widespread throughout the nation. The NY Attorney General entered into settlements with  numerous other insurers,securing agreements that they too will abandon Ingenix and contribute millions towards creation of an independent database to report on market rates.

Additionally, CMA is taking the lead in the lawsuit against WellPoint, given our knowledge and experience dealing with complaints about Anthem Blue Cross of California. It is hoped that these lawsuits will result in judicial relief or settlements similar to what was secured in the United and Ingenix settlement.

PacifiCare. The Settlement also applies to all affiliates and subsidiaries of the above-mentioned companies. This means that PacifiCare Health Systems, Inc. (“PacifiCare”) is subject to the settlement because it is a wholly-owned subsidiary of United. PacifiCare offers health insurance policies and health care service plans throughout California.  United acquired PacifiCare as of December 20, 2005.