In women’s health, this could certainly be viewed as a plus and an alternative for an immediate hysterectomy with the procedure and device that can be done in a doctor’s office.  If you are a female, you know that this is a very common condition that gets a lot of talk.

The device already carries the European CE approval.  As with most devices today software plays an important role and this has been part of the upgrade.  BD

The HTA System is designed to offer: 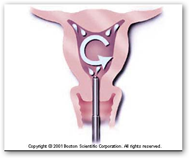 upgrades, and the HTA ProCerva Sheath with the cervical seal assist and tenaculum stabilizer.

NATICK, Mass., May 18 -- Boston Scientific Corporation (NYSE: BSX) today announced U.S. Food and Drug Administration (FDA) approval of its Genesys HTA™ System for the treatment of menorrhagia.  The Genesys HTA System is a next-generation endometrial ablation system designed to ablate the endometrial lining of the uterus in premenopausal women with menorrhagia.

Menorrhagia is abnormally heavy and prolonged menstrual bleeding.  An estimated 10 million women in the U.S. suffer from this condition.