The big concern is the non involvement of the patient’s doctor with the consumer tests as stated by one member of the FDA and I agree with not having a doctor in the loop somewhere along the line, at least with the information portions that may affect any current treatments the patient may be undergoing that are critical and/or serious in nature.

Also noted here was the fact that the FDA doesn’t regulate lab developed tests that fall under CMS regulation.  The tests were easy to understand 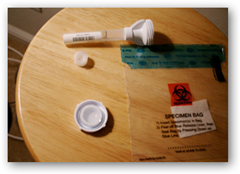 and were straight forward, but now that tests are predicting a risk for cancer, the bar has raised and things have changed, as they seem to be all over in healthcare and science with the rapid developments that are coming forward today.

What makes this interesting too is that universities in California are offering genetic testing and how any decisions will perhaps affect their programs.  BD

Stanford And U.C. Berkeley Offering Of Genetic Testing Is To Help Ensure Students Are Prepared to Handle Future of Personalized Medicine

A high bar is likely to be set for companies seeking to sell genetic tests directly to consumers, according to top Food and Drug Administration officials.

The agency is convening a two-day public hearing starting Monday to discuss how it would regulate diagnostic tests, including direct-to-consumer tests.

In an interview, Jeffrey Shuren, head of FDA's medical-devices division, and Alberto Gutierrez, who oversees the FDA unit that regulates certain laboratory tests, said they considered direct-to-consumer genetic tests "high risk" and have already informed companies selling such tests through their websites that their tests appear to be medical devices requiring FDA approval.

Mr. Shuren said he was concerned about cutting doctors out of the process of interpreting laboratory tests and afraid consumers could make risky medical decisions based on information that suggests they are at risk of developing cancer, diabetes or other diseases or could stop taking a needed medication.

The FDA does regulate laboratory tests that are sold to hospitals and doctor's offices along with over-the-counter tests like blood glucose test strips, but it hasn't required approval for laboratory-developed tests that fall under a system regulated by the Centers for Medicare and Medicaid Services.

The move would affect several other companies including Quest Diagnostics and Laboratory Corporation of America, or LabCor, and Genomic Health Inc., which sells a test that's well regarded in the medical community for predicting the risk of breast-cancer recurrence.