Home » Medically Related » Other Items of Interest » Pharma/FDA News » General Accounting Office Goes Under Cover to Review Consumer Genetic Companies – Are Varying Answers Like Getting a Second Opinion with Doctors?

General Accounting Office Goes Under Cover to Review Consumer Genetic Companies – Are Varying Answers Like Getting a Second Opinion with Doctors?

analytics and there were some variations, just like you would have if you went to see 4 different doctors.  The FDA has classified the tests as “medical devices” so this investigation might be a continuation on how to handle the consumer DNA firms and assure good quality information.

Hearings are to be held at the FDA to come to some type of conclusion as to how the DNA screenings should be handled and FDA approved. 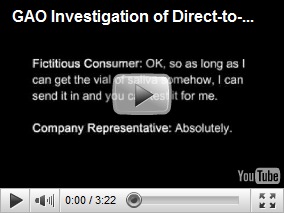 So, my question would be to wonder if this is like a 2nd opinion for doctors, would you go get a second one if you felt the first was not correct?  It’s all in the interpretation and a couple years ago when I spoke with the Chief Science Officer at Helicos, we talked about the same thing and today there’s still no exact answer here.  BD

The firms cited in the report include 23andMe, Pathway Genomics, DeCode Genetics and Navigenics, an official at the G.A.O. said Thursday during a Congressional hearing into such tests. Based in Mountainview, Calif., 23andMe is backed by financing from Google, and the company’s president, Anne Wojcicki, is the wife of Sergei Brin, a co-founder of Google.

Updated: An undercover investigation of some firms that sell genetic test kits to consumers found misleading test results and “egregious examples of deceptive marketing,” according to a report published today by the Government Accountability Office.

(Clarification:) The report said the four companies had sent the donors different results for the same sample and told donors they were at lower risk for getting diseases they already had, while two other companies suggested that a customer’s DNA could be used to create personalized supplements to cure diseases.