I have covered Nighthawk before and if you have had imaging done after hours at a hospital your images could have been read with their service. One of the biggest

outsourced markets in the world.  They do more than just the US, it’s global and images consist of MRIs, X-Rays, CT Scans and more.  They service over 1600 hospitals in the U.S., and 10 hospitals in Singapore and more.  If it’s an emergency results can come back as quickly as 10 minutes, with normal being around 45-60 minutes.

The company has a brand new facility and I had to laugh a bit when I read the sentence about using a toaster in the sever area that could shut it down, as power is used by data centers and it sounds like they were at the limit.  You can get electrocuted in those centers too.  Many are the result of add ons and when you create a new facility you have none of the old issues to deal with, but rather engineered and designed controls operating at top speeds and efficiencies. 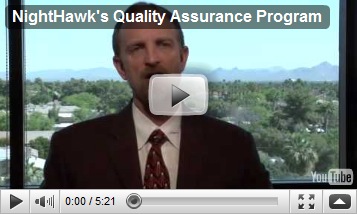 The entire move and new location was done in 30 days, almost landmark here!  They are saving power and resources too with using virtualization with VM Ware.  The new facility and servers will allow the company to pick up new accounts and expand with more room and power available.

In addition with the new common architecture the company is better suited to handle imaging from all over the world, but they themselves stated when they originally set up shop, they moved a little too fast without a lot of planning but they have it now.  BD

World Wide Technology, a solution provider and early adopter of Cisco's UCS technology, put its experience to good use in a deployment to help a radiology services provider store and migrate about 10,000 radiological images a day.

Working with Cisco (NSDQ:CSCO), VMware, and NetApp, St. Louis-based World Wide Technology built a complete virtual data center infrastructure in only 30 days, making it possible for NightHawk Radiology Services to not only manage its existing customer base, but also prepare for an expansion of its services offerings to a completely new set of customers.

"We deployed technology as needed," he said. "Our customers are mainly domestic, but our radiologists follow the Sun, and include members in places like Sydney and Zurich. So we had a wide range of server rooms, different power requirements, and different ways of error handling. That lead to service problems. In a remote office, using a toaster might crash a server."

NightHawk had a colocation facility in Chicago which housed most of its old technology, but had no room to expand. As a result, many of its servers were deployed in remote locations, Brande said. So the company opened a new facility in Phoenix and decided to implement a virtualized environment for the flexibility and the ability to control costs, he said.

Cisco also introduced NightHawk to World Wide Technology, which took over the lead on the project to configure, sell, and deploy UCS in NightHawk's Phoenix facility.

n addition to the Cisco equipment, WWT also deployed virtualization technology from VMware along with storage appliances from NetApp. Tying the virtual servers to each other, the physical servers, and storage were multiple Nexus 1000 virtual switches configured by WWT.