potential cells in the brain that also harbor cancer cells appears to be extending the survival rates of patients with this horrible degree of cancer tumors in the brain, which would be anyone’s biggest nightmare as a patient.

If you missed a recent post along the same lines you can view the link below and see what else is happening at the UCLA Cancer center with creating immune cells to seek out cancer and kill the cells in real time.  BD

Patients with deadly glioblastomas who received high doses of radiation that hit a portion of the brain that harbors neural stem cells had double the progression-free survival time as patients who had lower doses or no radiation targeting the area, a study from the Radiation Oncology Department at UCLA’s Jonsson Comprehensive Cancer Center has found.

Patients who underwent high doses of radiation that hit the specific neural stem cell site, known as the stem cell niche, experienced 15 months of progression-free survival, while patients receiving lower or no doses to this region experienced 7.2 months of progression-free survival, said Dr. Frank Pajonk, an associate professor of radiation oncology, a cancer center researcher and senior author of the study. 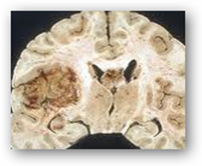 Pajonk said the study, published today in the early online edition of the journal BMC Cancer, could result in changes in the way radiation therapy is given to patients with these deadly brain cancers.

“Our study found that if you irradiated a part of the brain that was not necessarily part of the tumor the patients did better,” Pajonk said. “We have been struggling for years to come up with new combinations of drugs and targeted therapies that would improve survival for patients with glioblastoma. It may be that by re-shaping our radiation techniques we can extend survival for these patients.”

The retrospective study focused on the cases of 55 adult patients with grade 3 or grade 4 glioblastomas who received radiation at UCLA between February 2003 and May 2009. Pajonk said a prospective study is needed to confirm the results.

There is some evidence that many if not all cancers may spring from stem cells or progenitor cells that normally repair damage to the body, but that somehow become mutated and transform into cancer. In this case, Pajonk said the neural stem cell niche, called the periventricular region of the brain, may also be harboring stem cells that have transformed into brain cancer stem cells. However, the niche serves as a sort of safe harbor for the cancer stem cells, keeping them away from the site of the tumor but able to re-grow it once it’s removed and the malignant areas of the brain have been treated.

Pajonk theorizes that the brain cancer stem cells in the patients whose niches were irradiated with higher doses may have been damaged or eliminated, giving these patients more time before their cancer recurred.

“This suggests that the neural stem cell niche in the brain may be harboring cancer stem cells, thus providing novel therapy targets,” the study states. “We hypothesize that higher radiation doses to these niches improve patient survival by eradicating the cancer stem cells.”

Glioblastomas are the deadliest form of brain cancer. Surgery, chemotherapy and radiation are not usually effective and life expectancy is about 12 to 18 months. New and more effective treatments are needed to help this patient population, Pajonk said.

The study was funded by National Cancer Institute.

UCLA's Jonsson Comprehensive Cancer Center has more than 240 researchers and clinicians engaged in disease research, prevention, detection, control, treatment and education. One of the nation's largest comprehensive cancer centers, the Jonsson center is dedicated to promoting research and translating basic science into leading-edge clinical studies. In July 2009, the Jonsson Cancer Center was named among the top 12 cancer centers nationwide by U.S. News & World Report, a ranking it has held for 10 consecutive years. For more information on the Jonsson Cancer Center, visit our website at http://www.cancer.ucla.edu.