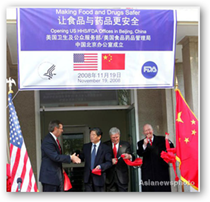 off with a ribbon cutting ceremony to open the first US FDA Office in China.

This was a major issue with contaminated heparin shipped to the US from the factory in China.  The link below will offer a little refresh on the situation.

A subsidiary of a US health insurance company is investing in a company that has a line of communication with the US FDA to work to promote the sale of more Chinese drugs and devices to the US and globally.

According to the information written here, the FDA was not allowed access to the factory.  I am sure we will here more as this carries forward.  There’s only a few US employees there and China is a big place so set up servers and collect data on quality control lot before the product is shipped, you can’t do it all manually and this would help the employees – wrote this up back in 2008, link below.

It is amazing to me how we can totally weight down hospitals and doctor and hammer on them for probability and yet we can’t get going on something that will benefit all of us with automation, amazing but what you come up with when politicians that are tech non participants.

Again, this comes back to adding some new software and algorithms to the process, but computers could provide this information in a couple of seconds.  Audit trails would also be there to allow for checking back on submissions.  A bank of sophisticated server farms could do the work.  This would also tend to build product credibility as well if everyone knows up front that the chemical content was being reported before the end packaging occurs.  Again, not to replace an actual physical inspection all together, but, it would also stand to make those inspections much more information rich and valuable and create safe consumable products.

While we are at it too, knock out the use of blind bills of lading too so the origin can be accurate and not hidden.  This has gone on in logistics forever.

We could also be using Microsoft Tags on the products too so send those quality control numbers and tag that lot and print on the label so we can all use our cell phones to find this stuff.

The even miss some of their own stuff getting out to the public.  BD

An investigation by Reps. Joe Barton and Michael Burgess has found that the Chinese government had "severely hampered" a Food and Drug Administration probe into contaminated heparin. 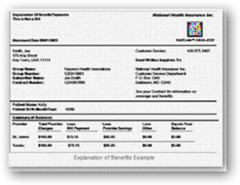 In a letter to FDA commissioner Dr. Margaret Hamburg, the two congressmen--who both sit on the House Energy and Commerce committee--said that FDA officials informed them in June that the agency was "denied full access to manufacturing and laboratory facilities," nor were they allowed to review records.

The FDA investigation focuses on a batch of tainted heparin, a popular blood thinner that was linked to at least 81 deaths in 2007 and 2008.