As well as the cost there has to be someone designated in most cases to coordinate all the red tape and administrative tasks too.  I have talked to some small companies here in California and they hate that part of it as some have to hire a full time person to do nothing but that. 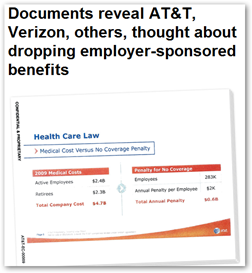 The cost has gone beyond what most small companies can afford and it’s cheaper to pay the penalties and perhaps this is a sign of the times too as we may see this more widespread in other states once the exchanges are set up.  Right now under the federal provisions there’s no penalty for companies with less than 50 employees.   Where this is going to get interesting as time moves on is to see what larger employers are going to do and you can read the CNN Money story here and see how they have already run some algorithms to see which is most feasible.

AT&T and Verizon are both companies with healthcare interests too.  All companies have said they would not drop insurance, but that was yesterday so we can watch and see if anything changes in the future as the battle continues.  BD

The relentlessly rising cost of health insurance is prompting some small Massachusetts companies to drop coverage for their workers and encourage them to sign up for state-subsidized care instead, a trend that, some analysts say, could eventually weigh heavily on the state’s already-stressed budget.

“They are giving up out of frustration,’’ Fields said of the employers. “Most of them are very compassionate but they simply can’t afford health insurance any more.’’

But insurance brokers say the pace of terminations has picked up considerably since then among small companies, of which there are thousands in Massachusetts. Many of these companies — restaurants, day-care centers, hair salons, and retail shops — typically pay such low wages that their workers qualify for state-subsidized health insurance when their employers drop their plans.