If you haven’t seen any of the series, this is worth a watch.  Warning there’s some 4 letter words here so don’t watch if those offend you.  I’m being nice here but someone said this sounded like one of the administrators of the hospitals where I work!  Yikes!

This is humor but it plays upon and makes a good point about those today who have lost their balance and are out of check with the human side of life due to perhaps over analyzing, or maybe just playing too many games on the computer today without real human interactions and emotions.

The boss is over indulged in text boxes and has lost his sense of normal and spews out the BS that many supervisors and executives do, if they only hear themselves but in their minds they have substantiated the BS!  I hear that at times in real life too.    What about our stockholders the boss asks?  You can kill yourself but don’t do it in here, go outside.  This sounds very similar to some of what I hear in the news today from health insurance CEOs, same screwed up non human rationale and they wonder why we don’t trust them.  The talented individual who made these videos did get fired from Best Buy though and perhaps he upset the stockholders.  I know stockholders are humans too, but they put money in front of everything it seems and forget about anything outside those parameters.  This little video absorbs this to the inth degree!  BD 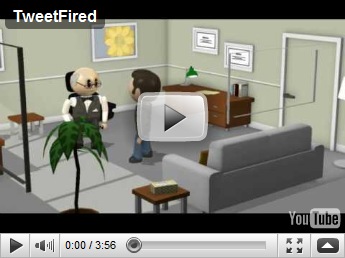 You’ve likely seen the EVO 4G vs. iPhone video. Maybe you’ve seen the follow up. And maybe you’ve read the story about how these videos almost got the guy who made them fired from his job at Best Buy. Well, he’s back with another video. And it’s good.

TweetFired is the story of Peter, a man who gets in trouble with his job because of the tweets he posts. “I can’t believe you would write this bullshit about the company that writes your checks,” his boss tells him.

When Peter asks how his boss even found the tweets, his boss replies: “I simply cross-referenced your interests on Facebook, checked your favorite hobbies on MySpace, researched your work history on LinkedIn, read your personal diary on Xanga, and then broke into your house in the middle of the night and videotaped you and your wife making love.“

The only problem? His tweets had nothing to do with his job. Yes, obviously this is a nice big F-You to Best Buy.