This is a challenge today for hospitals and takes a lot of collaboration from the IT department and administrators.  The IT department crosses over into the overall picture in other areas outside of just the hospital computer and network operations as their input is important for the “green” areas too.  To run and set up the “green” programs, much of this depends on technology and the IT department input is needed.

I like the pictures here from Jim Weeks from Greenwich Hospital posted on the web of what the server room used to look like and it’s present day appearance.  I think anyone can tell this is a major upgrade here not only in hardware, but functionality too.  I have been in some server rooms where I thought I was close to being electrocuted at times, as there’s a lot of power running through those areas and IT departments all over are doing a good job with reducing power consumption too. 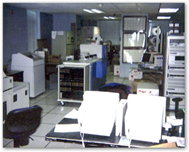 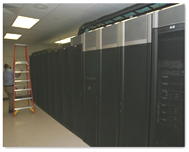 The entire area where the hospital resides had been revamped as you can see from the pictures below.  The lay out of the grounds is so much better organized and you can visibly see “green” on the grounds.  Let’s face it, would you rather walk through a nice flower garden or stand on a big slab of cement?  There’s not much debate there. 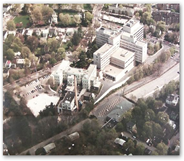 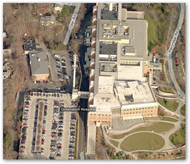 Last year I had the opportunity to tour a brand new wing built by a hospital here in California and I was amazed at how the “green” technology intertwined with not only data but also for the entire hospital.  I learned that even old linoleum could be recycled and used in new flooring!  The Greenwich Hospital made use of an old fountain in part of their work.

Skylights if designed properly can let in a lot of natural light and it also looks good and saves power consumption.  Building “green” takes an entire committee of it’s own today and the payback is good with not only reducing power consumption, but also gives the facility into a much more soothing appearance, away from the stark white walls we all knew in the past.

Greenwich Hospital has the honor of being one of the most wired hospitals in the US, so the informational benefits of wireless networks, RFIDs, etc. are there and working to help provide the data and timely tools that leads to better patient care.  Green and wired is where the future lies with all hospitals.  BD

Years before it was fashionable, Greenwich Hospital was thinking green. In 1996, when we began to revamp our facility, we chose to recycle the existing "brown field site" rather than move to undeveloped land, and when we recently built our Ambulatory Surgery Center on Holly Hill Lane, we renovated according to green standards within an existing facility.

When designing, constructing or operating our facilities, we have adhered to the Leadership in Energy and Environmental Design (LEED) guidelines established by the U.S. Green Buildings Council.

One of the most visible signs of our commitment is the Carl and Dorothy Bennett Community Garden, 2.5 acres of green space that has flower beds, a bluestone terrace, a recycled bronze fountain (salvaged from the 1964 South Wing Terrace) and more than 75 trees. The garden is a huge benefit to our staff, as well as our patients and visitors, who are able to enjoy this open space for relaxation and wellness.

As a result of price negotiations and reductions in natural gas and electricity use, we are cutting energy costs by $800,000 a year. While it's in vogue to adopt green practices, there is also an economic payback.