The current findings to be a new basis for targeting treatments for prostate cancer with the ability to create an “infected” environment, which has not been done before.  At the UCLA cancer center there’s a multitude of very specific cancer research projects in place.  Another example of a press release from last week can be viewed at the link below relative to cancer research to find cures and better treatments.

UCLA's Jonsson Comprehensive Cancer Center has more than 240 researchers and clinicians engaged in disease research, prevention, detection, control, treatment and education and the facility opened in June of 2009.

In the media today news about prostate cancer has been plentiful and some of which results from various analytics and a lot of speculation/marketing events that may or may not always reveal “useful” consumer information and with research efforts as described within perhaps we can get closer to a cure and treatments that are sound and clinically founded.  BD

UCLA scientists have identified for the first time a cell-of-origin for human prostate cancer, a discovery that could result in better predictive and diagnostics tools and the development of new and more effective targeted treatments for the disease.

The researchers, from UCLA’s Jonsson Comprehensive Cancer Center, proved that basal cells found in benign prostate tissue could become human prostate cancer in mice with suppressed immune systems, a finding that bucks conventional wisdom. It had been widely believed that luminal cells found in the prostate were the culprits behind prostate cancer because the resulting malignancies closely resembled luminal cells, said Dr. Owen Witte, a Jonsson Cancer Center member and director of the UCLA Broad Stem Cell Research Center.

“Certainly the dominant thought is that human prostate cancer arose from the luminal cells because the cancers had more features resembling luminal cells,” said Witte, senior author of the study and a Howard Hughes Medical Institute Investigator. “But we were able to start with a basal cell and induce human prostate cancer and now, as we go forward, this gives us a place to look in understanding the sequence of genetic events that initiates prostate cancer and defining the cell signaling pathways that may be at work fueling the malignancy, helping us to potentially uncover new targets for therapy.”

The study appears July 30, 2010 in the peer-reviewed journal Science.

The researchers took healthy tissue from prostate biopsies and separated the cells based on their surface marker expression into groups of luminal cells and groups of basal cells. Using viral vectors as vehicles, they then expressed altered genes known to cause cancer into both cell populations and placed the cells in mice to see which developed cancer, said Andrew Goldstein, a UCLA graduate student and first author of the study.

“Because of the widespread belief that luminal cells were the root of human prostate cancer, it would have been those cells examined and targeted to treat the disease,” said Goldstein. “This study tells us that basal cells play an important role in the prostate cancer development process and should be an additional focus of targeted therapies.”

In normal prostate tissue, basal cells have a more stem cell-like function, Goldstein said, meaning they proliferate more to re-grow human prostate tissue. Luminal cells don’t proliferate as much, but rather produce major proteins that are important for reproduction. Something is going awry in the basal cells that results in cancer and Witte and Goldstein plan to study those cells to uncover the mechanisms that result in malignancy.

Currently, there is a dearth of knowledge about how prostate cancer develops to treat it effectively in a targeted way, as Herceptin targets an out-of-control production of growth factor receptors in breast cancer cells. The major targeted therapy used for prostate cancer is directed at the androgen receptor and it is not always effective, Witte said. 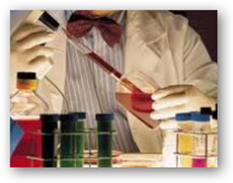 The new human-in-mouse model system developed in the study – created by taking healthy human prostate tissue that will induce cancer once it is placed in mice instead of taking malignant tissue that is already cancerous and implanting it – can now be used to evaluate the effectiveness of new types of therapeutics. By using defined genetic events to activate specific signaling pathways, researchers can more easily compare therapeutic efficacy. The new model, by deconstructing tissue and then reconstructing it, also will aid in analyzing how the cells change during cancer progression.

“There are very few examples of taking benign cells and turning them into cancer experimentally,” Goldstein said. “We usually study cancer cell lines created from malignant tumors. This study resulted in the creation of a novel model system that is highly adaptable, such that we can test any cellular pathway and its interactions with other genes known to induce cancer, and we can start with any type of cell as long as it can be reproducibly purified.”

In this system, Witte and Goldstein know the “history” of the cells that became cancer, unlike the cancer cells lines used in other work.

“We know those cells are malignant, but we don’t know how they got there,” Goldstein said. “By starting with healthy cells and turning them into cancer, we can study the cancer development process. If we understand where the cancer comes from, we may be able to develop better predictive and diagnostic tools. If we had better predictive tools, we could look earlier in the process of cancer development and find markers that are better than the current PSA test at catching disease early, when it is more treatable.”

Rising PSA levels can indicate the presence of cancer that is already developing in the prostate. However, now that it is known that basal cells are one root of human prostate cancers, scientists can study pre-malignant basal cells and uncover what they express that the healthy ones don’t, perhaps revealing a new marker for early detection, Goldstein said. Also, a therapy directed at the pre-malignant basal cells about to become malignant could provide a way to prevent the cancer before it becomes dangerous.

This year alone, more than 217,000 men will be diagnosed with prostate cancer. Of those, more than 32,000 will die from their disease.

The study was funded by a Prostate Cancer Foundation Challenge Award, the Howard Hughes Medical Institute and the Department of Defense.

The UCLA stem cell center was launched in 2005 with a UCLA commitment of $20 million over five years. A $20 million gift from the Eli and Edythe Broad Foundation in 2007 resulted in the renaming of the center. With more than 200 members, the Eli and Edythe Broad Center of Regenerative Medicine and Stem Cell Research is committed to a multi-disciplinary, integrated collaboration of scientific, academic and medical disciplines for the purpose of understanding adult and human embryonic stem cells.

The center supports innovation, excellence and the highest ethical standards focused on stem cell research with the intent of facilitating basic scientific inquiry directed towards future clinical applications to treat disease. The center is a collaboration of the David Geffen School of Medicine, UCLA’s Jonsson Cancer Center, the Henry Samueli School of Engineering and Applied Science and the UCLA College of Letters and Science. To learn more about the center, visit our web site at http://www.stemcell.ucla.edu.