When you stop and look at what this study came up with for 10 states and only one carrier, can you imagine what the “reserves” might be across the country if all were tallied up.  From a post from a couple years ago, 3 carriers in the state of Washington found this group of 3 carriers had 2.2 billion 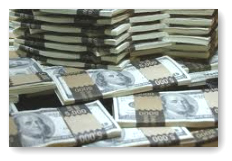 By law, insurance carriers are supposed to have “reserve cash files” or rainy day funds and we found out when Wall Street crashed a couple years ago how some companies like AIG didn’t have solvent reserves.  BD

Nonprofit Blue Cross and Blue Shield health insurers in several states have accumulated billions of dollars in surplus money over the last decade even as they continued to raise their insurance rates by as much as 20% annually for many customers, according to a report Thursday.

The study by Consumers Union found that seven of 10 such health plans across the country held more than three times the amount of surplus funds needed to remain solvent.

The plans that were studied are in Alabama, Arizona, Massachusetts, Michigan, New York, North Carolina, Oregon, Pennsylvania, Tennessee and Wyoming. They held more than $32 billion in surplus cash at the end of 2008, the report said.