Devices that report data are somewhat a focus on the Medical Quack and it appears now the accelerometers are going to get even “smarter’ and as usual we need to make reporting data a “game” in order to interest and average American consumer, as that’s what everything revolved around today in a big way, ask someone to do 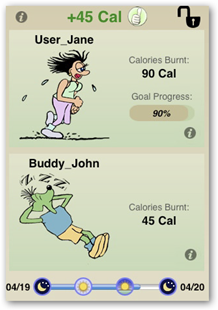 something for academic or educational methods, you have a no go, but turn it into a game and surprisingly enough we have interest.  Below are a couple other recent posts on the topic.

What I also address to is the fact that a game is encouraging and not a bad thing, but be aware of who gets the data, who uses it and if any of this can be analyzed as any type of detriment to functioning in the economical world, in other words could some of this data result in the potential of higher insurance premiums.  If we didn’t have that to worry about, I think  in general the public would be more open to participate, but let’s face it, that’s the reality of what happens sometimes along with some extensive marketing lists that will hound you at times too.  Not too long ago many were “suckered” in on Facebook by playing a game, so “a game as a game is not always a game”, lot’s of algorithms and software at work at times running in the background.

I can’t think of a better place to test some of this technology than perhaps some current members of Congress so they know what’s going on and perhaps will be in touch with what is developing out there beyond budgets and cutting costs, you think?   Since some of the new software and products have privacy issues to be discussed, why not? It would make an interesting video to see our leadership comparing their activity and receiving some text messages when they are not being active enough.  This would be choice right in the middle of some filibusters too (grin).  I don’t they they have perfect BMIs either, just like us.

I make some of these comments as this is what the average citizen is facing to multi task and get still do their job, so this type of technology needs to be used in a way that is simple for the consumer, protects privacy and does not turn up analyzed somewhere via marketing efforts to work against the entire idea, and most important of all “not be disruptive”.  When you think about it we can’t even handle just the basic use of cell phones without being distracted.

Sometimes we have Venture Capital companies backing some of the device makers and thus the push for sales is eminent and the implementation of such devices gets left out in the cold, in other words we don’t really care how it gets use, get the dollars in the door here so we can stay alive as a company.  If that is not an issue then implementation with good methodologies can move forward.

In the meantime, it will be interesting to see new devices that are being molded and any implementation methods that are introduced too, life is one kind of game or another today.  BD

Mr. Manohar will be presenting his team's work at the 2010 Experimental Biology meeting in Anaheim, CA on April 24-28. His presentation, entitled "Laboratory evaluation of the accuracy of a triaxial accelerometer embedded into a cell phone platform for measuring physical activity," is based on research performed with Shelly McCrady and James Levine of the Mayo Clinic, Rochester, MN; and Yuichi Fujiki and Ioannis Pavlidis from the Department of Computer Science at the University of Houston, Houston, TX.

Manohar's group set out to design a device to promote more physical activity. The ideal device would be something that is affordable and commercially available. The team settled on the iPhone® and the iPod Touch® because many people already own these devices and they come with built in motion sensors. The research group created a program called the Walk n'Play that can be downloaded for free through iTunes® to distribute the technology to a wider population. More and more Smart phones are using motion sensors and making the program compatible between platforms will not be difficult.

The iPhone® and the iPod Touch use motion sensors called accelerometers that detect motion. The program is designed to access the accelerometer in the phone and convert the motion that is detected into activity units as a way to measure the physical activity.