We talk about super computing on Wall Street and I mention occasionally how this technology slips over to healthcare and here’s one prime example.  Obviously with risk management with health insurers, this would appear to be a company they would consider watching.  Already major pharma companies such as Pfizer and

Johnson and Johnson have bought in.  Pharma’s interest is the portion that would match the patient to the most effective drug for their condition, and insurers of course want to see what the least costly drug matched would be.

With the culmination of data the company plans to “simulate” clinical trial results by using all sources of data to use a technology type of algorithm to project what the outcome might be, and of course this is not done to replace a trial by any means but rather go into a trial with some projected intelligence before it begins with business intelligence data analysis done ahead of the trial.  This could be a good thing as the data and analysis might point out some potential areas of concern to watch for during the trial.  We are in the world of “high frequency healthcare” using the “crystal balls” of algorithms to predict.  Casualty losses are much different than humans though as they are objects and not human lives, and there’s no science yet that has been able to accomplish full predictability on human lives.   Last year I made a post about an investment from Microsoft, buying a super computing technology so GNS is not along in the “super computing” business.

Last year I had a discussion with Microsoft Life Sciences about where they are going with Life Sciences and these are the folks that hit the ground running, using not only their own technologies, but all playing in the “sandbox” to incorporate other software and analysis and processing software from other sources.

For pharma this involves sticking a big toe into the water as they could find that a big block buster type drug may not be as effective as marketed and rather another drug company has one that works better, and the dice could also roll the other way to confirm that they have a treatment that is highly effective.  In essence, this will end up guiding pharma which direction to go with future and present research and development. It wall also lead pharma in the right direction to market drugs to individuals who have certain markers and basically not waste time and effort to where it is perhaps not as effective. The cost side of this is pretty much a no brainer for the risk management side with what insurers will and will not compensate.  That information will be used. 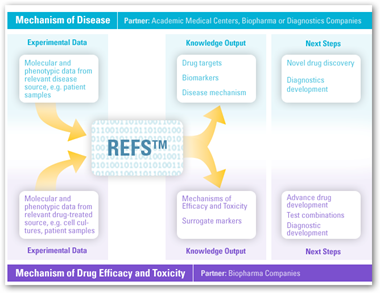 As Xconomy mentions here in a related article there is a spin off company here too to help Wall Street too called Fina Technologies.  With this technology they want to be able to give guidance to investors on where to invest.  Fina is backed with venture capital so this knowledge spills over to the world of investing.

It’s again all about those algorithms and here we have a bit of a reversal with some life sciences algorithms being applied to Wall Street investing.  As you can read below they are not the only game in town with using these types of algorithms.

“Investment computer models—which are basically algorithms based on investment hypotheses—have had varied success. Holden, an MIT-trained engineer with more than a decade of experience in the investment world at Deutsche Bank and other financial institutions, says that a chronic problem is trying to jam too many variables or parameters into these algorithms. Fina aims to overcome this over-modeling problem with the REFS platform, which has shown that it can handle the

massive amounts of data about biochemical signaling pathways in the human body needed to make predictions about how various drug candidates will affect the system.”

“The company’s patent license from Gene Network Sciences covers uses of the technology in e-commerce, government, and other non-life sciences sectors, but Fina determined that the financial industry was the best place to start outside of life sciences because of demand for better models among investment funds and other trading operations, Holden says.”

“Still, Fina has some large competitors in the business applying quantitative modeling and other technologies to investment strategy. Some of the larger and more well-established players in this field include New York-based investment firm DE Shaw Group, which boasts that it has spent more than twenty years and hundreds of millions of dollars developing quantitative investment models, and Renaissance Technologies, a hedge fund that uses computer-based models to predict market changes and to automate trades.”

When you look at the board of Fina, you will find a mixed group here members from Life Science Technologies and Investment banking, such as Goldman Sachs so just by looking at the individuals pooled here, we have the banking and technology businesses collaborating.  As you can see analytics is taking the forefront not only in drug development and marketing, but also investing.  Last year I made the following post and perhaps I was ahead of my time here in stating that Congress needs to be very aware of the technologies of “High Frequency Healthcare”.

If you read along here you can definitely see the connection between personalized medicine and investing by combining all areas with analytics to bridge both better treatments and bring Wall Street in for the areas to speculate on where to place their investments.  Hopefully an effort like this will keep healthcare in the front here and add on the investment side secondary and I would hope the algorithms don’t skew the focus of where we are going here with short selling or pushing investments into hedge funds, derivatives  or other strategies to make some perhaps short term cash on the run.  If used wisely without hedging bets against drugs that may not be as effective for an example, we could stand to all benefit with treating patients with the appropriate drugs and keep investments in the areas of companies that are in fact developing treatments that are helping patients and have cost effective drugs become more readily available.

Do you see the connection here between Healthcare and Wall Street?  This is just one example but it all rolls together in the type of care we receive.  BD

Health insurers have wasted billions of dollars on reimbursing drugs that don’t work for certain patients. But Cambridge, MA-based Gene Network Sciences might have a cure for this spending ailment. It is using supercomputing technology to build databases that can match patients with the most suitable drugs or other treatments, company CEO Colin Hill says. Xconomy.

Within the healthcare market, the company is initially seeking partnerships with pharmacy benefit management firms. These outfits, such as CVS Caremark (NYSE:CVS) and Medco Health Solutions (NYSE:MHS), handle prescription drug plans for more than 210 million Americans, the majority of the total U.S. population, according to the Pharmacy Care Management Association, an industry group based in Washington, DC. The PBMs, as they are often called, have already adopted e-prescribing to reduce errors and streamline how doctors order prescriptions for patients, and Hill says these companies have also implemented computer models. But the drug benefit mangers don’t have the artificial intelligence capabilities that his firm offers he says.

“For the payers, it’s really about using innovation to deliver smart, more cost-effective medicines,” Hill says. “The next generation analytics, like GNS Healthcare provides, will match the right drugs to the right patients for the right price.”

The company is taking a different technical approach from its drug R&D work to solve problems for healthcare customers, Hill says. For drug companies, Gene Network Sciences has reverse-engineered detailed biological systems on supercomputers with genomic, proteomic, and clinical data. These computer-simulated systems are then used to perform billions of virtual experiments (what the company calls “forward simulation”) to identify biomarkers of drug efficacy and toxicity to stratify patients in clinical trials. Those biomarkers can later be confirmed in the traditional wet lab environment. A goal here is to apply the firm’s reverse engineering-forward simulation (REFS) technology to speed the often tedious and time-consuming drug discovery and development process, enabling pharmaceutical companies get to market with new products quicker than they could with conventional methods of finding and testing new products.

Take anti-TNF drugs for multiple sclerosis such as Abbott Laboratories’s adalimumab (Humira), which racked up an estimated $5 billion in sales last year. Hill says that anti-TNF drugs don’t work for more than a third of patients who try them.  So his company worked with Biogen (which markets alternative treatments to Abbott’s drug) to identify biomarkers that predict whether patients are likely to benefit from anti-TNFs. Such information could easily be tucked into the systems that Gene Network Sciences wants to build for PBMs, helping them avoid spending a fortune on TNF blockers that are bound to fail for certain individuals.

Next year, Hill says, he expects the healthcare market to be a major revenue source for his firm. The company has been seeking new ways to generate revenue from its technology. In January we covered GNS’s spin-off Fina Technologies, which is applying the reverse engineering/forward simulation technology to build smarter computer models to guide fund managers’ investment strategies on Wall Street.