Please find registration forms and more info at: www.ramfreeclinic.org  As noted, if they could have brought doctors across state lines, Stan Brock said he could have flown them here from other states.  If you can volunteer, go to the website for more information.  Last year it seemed they had shortages in the same areas and I remember the USC dentistry school was right in there helping out too.  BD 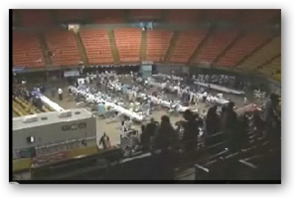 Instead of 1,200 wristbands to distribute as they originally said, volunteers were left with only 750. The lower number was the result of significant overflow on the clinic's first day.

Brock said the shortage of volunteers highlights the importance of pending state legislation that would allow out-of-state doctors to volunteer at the clinic.

Despite staying open until 8 p.m., two hours later than scheduled, organizers said by day's end they had to ask 630 people to come back later for additional services.

Stan Brock, who founded the nonprofit Remote Area Medical, which organized the clinic, said a shortage of volunteers, particularly dentists, caused the overflow. Although the clinic has 94 dental chairs, Brock said 20 were empty much of Tuesday.

Eugene Martensen, 34, a disabled cabinet maker from San Pedro, got a wristband after waiting overnight. He surveyed the line of people who came later and were being told there was no more room, including would-be patients with canes, walkers and wheelchairs.