This is pretty cool so you could forget the mouse and keyboard, get that arm in action.  Bad news is though is that it won’t be ready for prime time until a couple of 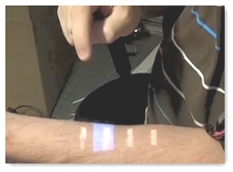 years so until them we have tablets and speech recognition to get through.

It will work with communicating with a mobile device or phone too.

When this progresses to where you can talk to your hand we will have gone the full gambit.  One thing you would want to remember though is to be sure to turn off the sensors during an exam or you might end up with some input not planned on (grin).  BD

Harrison, a graduate student at Carnegie Mellon University and a former intern at Microsoft Research, has developed a working prototype of a system called Skinput that does just that, essentially by turning a person's hand and forearm into a keyboard and screen.

When fitted with a pico-projector, the Skinput system could display an image of a digital keyboard on a person's forearm. So, using Skinput, someone could send text messages by tapping his or her arm in certain places -- without pulling the phone out of a pocket or purse.

The system, which has been under development for eight months, won't be commercially available for two to seven years, said Dan Morris, a Microsoft researcher who is working with Harrison on Skinput.

Skinput is one of a number of prototypes, ideas and near-products aiming to make computing more natural.

These devices seek to move beyond the mouse and physical keyboard, letting people communicate with their gadgets by gesturing, using sign language or, in the case of Skinput, tapping on their hands, fingers and forearms.

Skinput users wear an armband -- the prototype version is made of an elbow brace -- that's lined with 10 sensors. These sensors look like tiny diving boards with dumbbells on one end, and they pick up inaudible sounds that range in frequency from 25 to 78 hertz.