I wonder if these are the same folks who also spend time on peer to peer networks too, which is mild by comparison and the House and Senate are now trying to pass laws to prohibit government employees from using the popular music and video sharing networks on government computers.

We address this all the time with healthcare facilities and I would guess there should be just as much at risk with files at the SEC too. 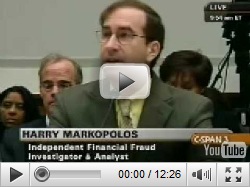 Just for the record though this is not limited to the SEC, I have found my share of this around plenty of doctor’s offices too.  BD

WASHINGTON (AP) - Senior staffers at the Securities and Exchange Commission spent hours surfing pornographic websites on government-issued computers while they were being paid to police the financial system, an agency watchdog says.

The SEC's inspector general conducted 33 probes of employees looking at explicit images in the past five years, according to a memo obtained by The Associated Press.

It was written by SEC Inspector General David Kotz in response to a request from Sen. Charles Grassley, R-Iowa.

- A senior attorney at the SEC's Washington headquarters spent up to eight hours a day looking at and downloading pornography. When he ran out of hard drive space, he burned the files to CDs or DVDs, which he kept in boxes around his office. He agreed to resign, an earlier watchdog report said.