This is an item certainly worth paying attention too as Mexico is vying to attract some of the revenue for American healthcare in Mexico and just like real estate, it’s about location to the US.  HealthNet has one program already in place, even though limited but it’s a start.  I used some screenshots here from a hospital in Tijuana.

We have the President of Mexico involved now and wanting to push for more American Healthcare in his country too.  Texas as well as California is a big focus point.

Last year when I attended the World Tourism conference in Los Angeles, I talked to a few of the hospital groups from Mexico as well as some from other countries  and they are building big new hospitals, some with hotels on premise.  These are state of the art facilities all using electronic medical records too.  I just have this curious nature about me and want to take in and learn what I can and hopefully share the awareness so the public is not blindsided here as it will and is affecting healthcare in the US.  There are companies and in this case, an active government in Mexico  looking for the revenue and dollars.  This in turn affects the income and payment factors of both hospitals and doctors in the US.

The hope is by having more hospitals in Mexico accredited by the Joint Commission it will eventually allow the flow of compensation through Medicare and more private insurers, again just keep an eye on what is developing here.  I am not promoting tourism but rather publish this information for awareness as if given my preferences I want to stay right here myself and be cared for when needed. 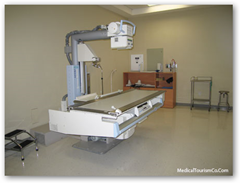 As noted there’s still a lot more work to be done to set up processes, contracts, etc.  BD

But participants in a daylong conference Wednesday at the Institute of the Americas on the UC San Diego campus said that a range of legislative and regulatory changes are needed. The event drew health care experts, tourism officials, nonprofit groups, real estate promoters and others who see the potential for growth in cross-border care.

With health care costs in Mexico available at a fraction of U.S. prices, Mexican facilities can help fill a growing demand for services including dentistry, surgery, long-term care and assisted living, advocates said. But providers still face hurdles, and one major step would be certifying private Mexican hospitals to U.S. standards so that older Americans could use their Medicare benefits in Mexico.

“The system cannot handle it here, so they need to look at Mexico as a safety net,” Carrillo said, adding that many of the newly insured will be legal immigrants from Mexico who are comfortable with Mexican physicians.

“That’s the starting point: How do you license a hospital, doctors, nurses, land use? How do you take care of immigration, tax issues? There’s a lot to do,” Monroy said.