This is a good thing overall and why not have people make a choice, you say yes or you say no.  It has been on our driver’s licenses for years to have the option to 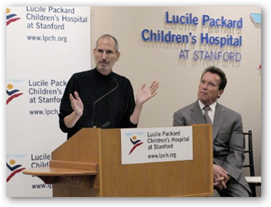 make a choice, which I always do, but by simply making it a requirement, nobody’s losing anything here.  You can still opt out if you feel this is not what you may want to do, but most citizens, including self here, don’t have a problem with this.  We see so much controversy on this subject and if this makes more organs available to save lives, why not as it is not inconveniencing anyone.  California would be the first state to have such a law if it passes.

Certainly Steve Jobs had the opportunity to travel and get on donor lists that most would not just due to who he is and what he does.  He had to travel to Memphis to receive his liver.  This story goes into detail here and how he decided to support the bill as more lives could be saved with some administrative procedures.  Steve Jobs also had to live in Memphis for a while as he recovered

He stated he was also one of those who came close to dying waiting for his transplant as well.  I always say that there’s nothing like first hand experience that makes a difference, and in these cases it’s experience that they would rather do without of course, but out of life’s experiences comes good things for others and improved processes.

What was also interesting to hear was about the “balance” with giving back and speaking to the Children’s hospital in the midst of release the IPad too, and we all know the attention it received.  With pressure he almost missed the speaking engagement, but he did not, the heart was in the right place.  After all Apple has many who can work on the IPad launch, but only one Steve Jobs who had a transplant with important information to share and legislation to suggest, a result of his own experience.

If California is successful here perhaps this effort will be expanded nationwide.  There’s a lot of work going on with Regenerative Medicine too with “growing human organs with stem cells”; however this is still distant and down the road.

People are walking around with bladders that have been grown and implanted and the liver is the next area of focus.  The video below was from a few months ago done on 60 minutes so combined with Live Donor programs we may have the full answers to save lives for individuals needing replacement organs.

They have grown livers for mice and implanted them.  These are the “body parts” guys.

If you read here often enough I have spoken with one company, Cook Medical with some interviews too that have done quite a bit in this area, check out the “interview”section on the blog.  See what is going on at Wake Forest below.

Here’s another summary I did on regenerative medicine in January 2010 and there’s a lot of good links in the post too.  BD

Tomorrow, the California State Senate's health committee will review a bill that, if passed, will make California the first state in the nation to create a live donor registry for kidney transplants. The bill will also require California drivers to decide whether they want to be organ donors when they renew their drivers' licenses.

According to one notable supporter, this second measure alone should double the number of organ transplants available in California.

The bill, proposed by state senator Elaine Alquist, is set to sail through the health committee, onto the state senate floor, and, eventually, into California state law. One California political insider told us: "I haven't heard anybody come out against this." Last week, the bill cleared the state senate's transportation committee with an 8-0 vote.

Hospitalization from a liver transplant can take several weeks, and it wasn't until mid-April that Steve felt well enough to move into his new home in Memphis. According to a source who conducted several interviews, neighbors noticed when he did. They spotted Steve's wife around town and the security cameras he had installed in trees surrounding his home. They noticed the guard parked in the driveway.

At a dinner in December -- no one will tell us where this dinner was -- Steve sat next to Maria Shriver, John F. Kennedy's niece and California governor Arnold Schwarzenegger's wife. Steve told her the whole story of his liver transplant. He complained that California doesn't do enough to encourage people to become organ donors. He told Maria that she should get her husband to do something about it -- that California should require people who want drivers' licenses to say whether or not they want to be organ donors (previously, they'd only had the option of saying they wanted to be donors).

And that's what the Governor's bill will do. It will simply require the DMV to ask you if you'd like to become an organ donor. That's it. Asking this one simple question may double the number of transplant organs available in California -- one simple question. And that's a very high return on investment, especially for the over 20,000 Californians currently waiting for an organ transplant.

How Steve Jobs Got Sick, Got Better, And Decided To Save Some Lives