I know that parking structure in Long Beach but last time I was there no Google car.  If I am not mistaken, the Google car is the forward workings of Stanford who built the autonomous car, Junior that competed in the last Darpa Urban Challenge and came in second place.  The Intel car and I’m sure the Google car is the same or similar runs off of 4 servers in the trunk, just like ones you buy off the shelf.  it looks like there’s a model upgrade on the car since the “Junior” days and all the sensors are now hidden and contained versus the earlier days.  The car really moves. 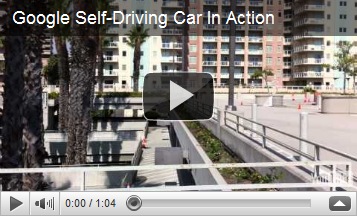 Here’s some history on the car before the Darpa challenge that tells a bit more about it.  BD 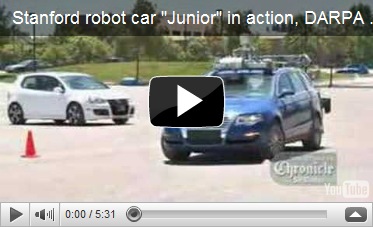 Google gave folks a brief glimpse at its super secret self-driving cars last fall, but nothing like what it's just showed off at the TED conference that's happening this week in Long Beach, California. The company is not only actually letting attendees inside the autonomous car for a first-hand demonstration, but it's intentionally stepped things up to an "aggressive" level to show just how capable the car really is -- we're talking squealing tires and really tight cornering (all on a closed course, naturally).