I have posted on this before and below is the prior article about Becky McCain.  This is fascinating to listen to her comments and anyone can benefit here.  She states that the dangers 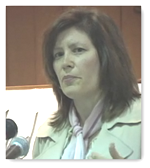 are being hid and is requesting OSHA coverage for workers due to the condition she contracted as a molecular biologist, who manipulates DNA, works with assays and clones genetics with stem cells.

“She was working with stem cell research and with various viruses.  Pfizer will not release her medical records.  It took 2 years to find out what she had been exposed to.   What is shocking is that it was ruled that “trade secrets” were ruled as more important than her being able to get her health records.  Genetically engineered viruses are created in all labs so cures can be created.  They are cells that can make animals sick, so they can make humans sick too.  She brings up some very good points about Biotech safety being needed everywhere.

What is scary is the changing of the coatings of a virus made for research, supposedly they do not replicate but by doing so, a virus could change properties and become airborne.   Epidemics could be created if accidentally released in the wild.  The government has guidelines, but no real laws and want to keep it that way so as not to interfere with progress and there’s no way they want the news getting out to the public.  She’s calling for scientists to stand up and speak out for public health and safety standards in Biotech.  Watch the last few minutes of the somewhat lengthy video though as she speaks of another injured worker, again from a virus in the lab.”

In the news in September 2009, one scientist’s death was apparently related to a bacteria he was researching.

This is new territory with research in safety and she questions the money issue.  She talks about the roof blowing up off the facility and thought it was a good time to talk safety.  She was told her “unsafe” working department was legal, and they followed what was “legal” but maybe not “safe”.  They had a mysterious illness at the lab over months and they finally pinpointed the source, a hood where embryonic mouse stem cells were based.

She says its about money and not only just Pfizer with safety and working conditions.  She states that unless it’s a human type virus, not much attention is paid as humans will not get the virus.  She can’t get specifically from Pfizer as to exactly what virus she was exposed to after her doctor diagnosed her with post viral exposure.  They need the genetic code and the structure, something perhaps above and beyond what the comprehension of OSHA could be.  Trade secrets had the priority over getting the information.  Nobody had authority to order the exposure records.  Judge ordered Pfizer to release records, but they have not.  People were also eating their lunch in the lab, not good.

She talks about changing the properties of problems like HIV by stripping the coat off and place a rabies like coat on it and now the HIV virus can spread via the eyes or breathing.  Again, very much worth listening to her video and glad she’s making progress here in bringing this to focus as we have more and ore biotech labs in existence today and safety is something that has not been addressed.  Private industry has guidelines but they have no teeth so basically they can be ignored and there is nothing that can be done – it’s about the money with no liability or responsibility for the working conditions.  BD

Hartford — Becky McClain, a Deep River scientist who claims to have been infected by an experimental virus while working at Pfizer Inc.'s Groton laboratories, was awarded $1.37 million today by a U.S. District Court jury.

Workers' rights organizations immediately hailed the verdict, in which Pfizer also was ordered to pay McClain's attorneys' fees. They said the outcome of the federal civil suit was a major milestone for biotech and nanotech workers everywhere.

McClain said she asked for a transfer out of Lab B313 because of ongoing health concerns. Later, she developed chronic fatigue symptoms, according to the suit, and discovered that a co-worker had been working next to her with a "dangerous lentivirus material (similar to the AIDS virus) and embryonic stem cells on an open lab bench without biological containment."

Backers of McClain said OSHA denied her workplace complaints largely because federal worker-safety laws have not kept pace with the rising hazards in U.S. laboratories. They have called for OSHA to reopen its investigation of the McClain case, a cause that may have received a boost from the six jurors whose verdict was read in court today.

But McClain has said there is no known cure for the condition, and claims that Pfizer has refused to hand over exposure records that might help her identify the virus that infected her. She said Pfizer has claimed exemption from laws requiring health records to be handed over based on other laws that protect patent information.